Tributes have been paid to one of Britain’s oldest competitive cyclists who died at the age of 91 after being hit by a van on a dual carriageway.

Ray Dare, who had been a member of the Kingston Phoenix Road Club for more than 65 years, was killed taking part in a time trial while trying to set a new national record for his age group.

He was hit by a van as he cycled on the A41 Ashton Clinton bypass near Aylesbury, Buckinghamshire last Wednesday afternoon. He died at the scene.

Friends have paid tribute to Mr Dare, who got his first bicycle at the age of 12, as “a genuine legend” and “inspiring gentlemen”.

His close friend John Beer, who was also a KPRC member, said: “Ray died doing what he loved. I’m sure he was well on his way to the record.

“He was hit on a straight flat open piece of road, he had two miles to go. We should all remember him for the truly amazing cyclist and husband and father he was.” 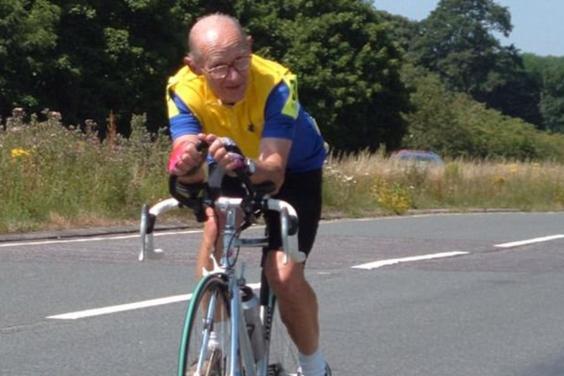 In a statement, the club said: “The fact that Ray was still chasing records at 91 shows the quiet and steely determination of the man and the Phoenix will always be extremely proud of him and his exploits.

“A genuine legend of our club and the sport. He’s going to be greatly missed.”

In a message posted on Facebook, Sarah Irwin paid tribute to Mr Dare as an “inspiring gentleman”.

Mr Dare, a retired telecoms engineer, was born in Caerphilly, south Wales, and moved to Surrey, where he lived for most of his life, at the age of three. When he was 13, he rode 165 miles from Morden to Caerphilly with his older brother to visit his aunt.

He entered his first time trial with the cycling club in 1951 and held the 12-hour distance record for 70 to 75 year olds.

Mr Dare, who leaves behind his wife Beryl, was also running sub-four-hour marathons will into his seventies. At 70, he took fourth place in the 70-75 age group in the London marathon.

Last month, he rode a sub-30 minute time trial at the Alton 10, stopping the clock at 29 minutes 59 seconds.

Thames Valley Police are appealing for witnesses to the fatal crash, which happened at about 2.45pm last Wednesday, July 19.

Anyone with information can be reached on the non-emergency number 101 quoting the reference 884 19/7/17.