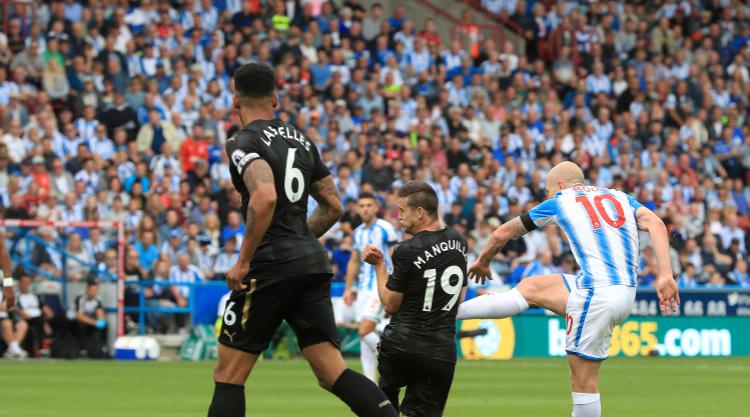 The Australian, who this summer turned a loan from Manchester City into a permanent signing that could rise to £10million, smashed in a 50th-minute winner following a one-two with Elias Kachunga as the Terriers defeated one of the sides they came up with last term.

It meant David Wagner’s men followed up last weekend’s 3-0 victory at Crystal Palace with another three points to become just the third newly-promoted side to win their first two games in the Premier League era, emulating Bolton in 2001 and Hull last season.

Twenty-three years to the day that Huddersfield fans watched their first game in this venue against Wycombe, the John Smith’s Stadium was hosting its maiden Premier League match, with some fans having paid as little as £100 for their season card thanks to a pledge by chairman Dean Hoyle.

His name was chanted prior to kick-off as the players emerged to be greeted by a ‘Terriers’ mosaic and the sound of thousands of clappers during an electric atmosphere which continued as the hosts tried to seize control early on.

Mooy’s long-range shot provided Rob Elliot with his first test and the Newcastle keeper was grateful Tom Ince’s vicious try, which came courtesy of a mislaid Christian Atsu pass, was straight at him.

A Magpies team featuring three enforced changes soon settled to quieten the crowd, though, and they produced the half’s best chance in the 17th minute through Matt Ritchie.

Ayoze Perez laid the ball off to him on the edge of the area and the winger’s effort was heading straight for the bottom corner only for Jonas Lossl to produce a fine one-handed save to tip it around the post.

Newcastle’s only other first-half scare came when Atsu and Javier Manquillo were caught out trying to play their way out of trouble, though Steve Mounie was correctly adjudged to be offside by the time he fired at Elliot.

There were half-hearted penalty appeals at the other end when Atsu’s header hit the back of Chris Lowe’s arm, not that he knew anything about it, and the Terriers full-back was then bailed out by two fine Christopher Schindler tackles, the second of which had to be timed right on Dwight Gayle.

Following a half with few first opportunities, it took less than five minutes after the restart for Mooy to lash the hosts ahead.

The Australian rolled a pass into Kachunga in the box and claimed the one-two return around Manquillo before dispatching an unstoppable effort into the corner to leave Elliot with no chance.

Mooy had been a key figure in Huddersfield’s promotion-winning campaign last term but this was just his fifth goal for the club, with one of the previous four having come at home to Newcastle too.

Rafael Benitez’s reaction was to replace Gayle with recent recruit Joselu and the Spaniard nearly scored a carbon copy of Mooy’s effort at the other end.

The difference between their one-two was that Joselu’s shot lacked any power, making it all the easier for Lossl to divert wide.

From the resulting corner Perez had an even better opportunity but his hooked volley went over the crossbar as Newcastle’s wait for a first goal of the season went on.

Jacob Murphy, another of Benitez’s replacements, was denied by a brilliant Lowe sliding challenge as Huddersfield held firm to make it two wins from two.