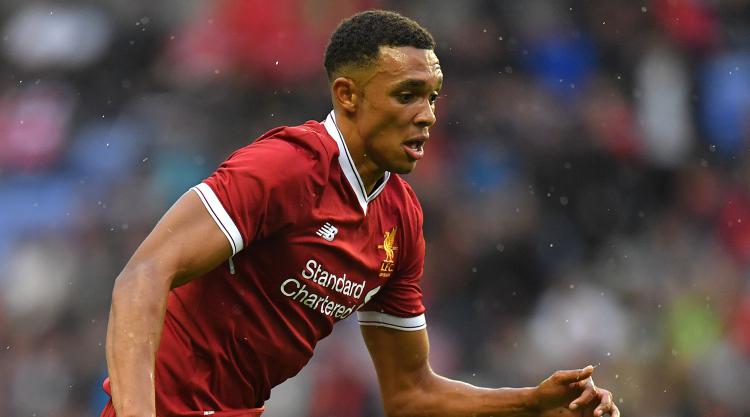 Teenager Trent Alexander-Arnold enjoyed an extra-special European debut with a brilliant free-kick to set Liverpool on their way to a 2-1 victory in their Champions League play-off first leg against Hoffenheim.

Set-pieces had been the team’s downfall at Watford on Saturday but the 18-year-old, in only his 14th senior appearance, showed there is also a flip-side with a maiden goal the absent wantaway Brazilian Philippe Coutinho would have been proud of.

Simon Mignolet’s save from former Leicester striker Andrej Kramaric’s poor penalty early in the game proved equally as valuable, and although Havard Nordtveit’s own goal gave them a cushion, Mark Uth’s 87th-minute strike ensured next week’s second leg at Anfield will not be straightforward.

Alexander-Arnold is the first Liverpool-born player to score for the club since Rickie Lambert in January 2015 and he has already had the seal of approval from another local lad, Steven Gerrard, who in April offered the opinion, “Trent’s going to be a beauty”.

His 35th-minute free-kick was certainly that, whipped over a seven-man wall, and although goalkeeper Oliver Baumann appeared slow to react that should not detract from the quality of the strike.

Alexander-Arnold has been given his chance in the team due to injury to England international Nathaniel Clyne, although his promising performances towards the end of last season and his form in summer friendlies suggested he would be pushing the England international hard going into this campaign.

That he was not only Liverpool’s best defender but the best outfield player – Mignolet made a couple of important saves – against a team playing their first Champions League fixture will have manager Jurgen Klopp asking questions of those far more experienced around him.

After shipping three goals at Vicarage Road, Liverpool’s backline was equally as unconvincing in the Rhein-Neckar-Arena, with Dejan Lovren conceding an 11th-minute penalty with a foul on former Arsenal striker Serge Gnabry.

However, he was spared by Mignolet, who barely had to move to beat away Kramaric’s effort – the Belgium international’s seventh spot-kick save with only Sam Hardy (10), Elisha Scott (nine) and Bruce Grobbelaar (eight) making more in the club’s history.

The game was played at a hectic pace, with both Klopp and Hoffenheim counterpart Julian Nagelsmann proponents of a high-tempo pressing game which did nothing for Liverpool’s nerves as they looked to reach the group stage for only the second time in eight seasons.

Mohamed Salah poked a shot wide and Alexander-Arnold nearly inadvertently scored with a clearance which rebounded off him into Baumann’s arms, before stepping in front of senior colleagues Emre Can and Alberto Moreno to apply a touch of class after Sadio Mane was fouled.

Mignolet continued his heroics by charging down Gnabry’s shot but Sandro Wagner hit the rebound against the outside of the post when he should have done better faced with an open goal – as should Lovren and former Hoffenheim forward Roberto Firmino either side of the interval.

Milner, 13 years Alexander-Arnold’s senior, made sure of the win when his cross went in off Nordtveit but Uth’s late strike gave last season’s fourth-placed Bundesliga team hope.