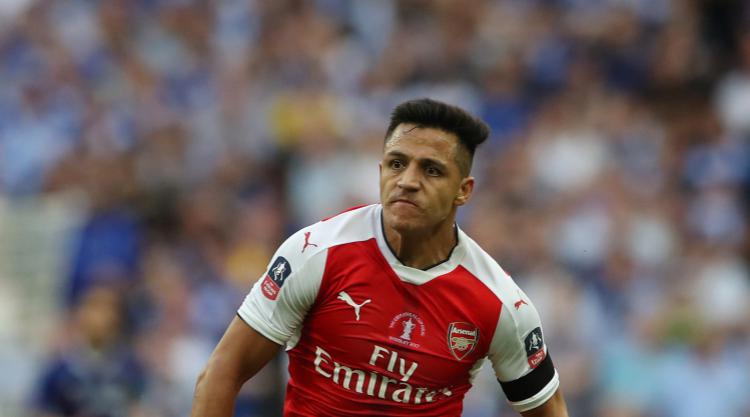 Arsene Wenger reiterated his stance that Alexis Sanchez will not leave Arsenal this summer and that he will return to the club on Tuesday.

The Chile international has yet to begin pre-season training with his team-mates following his exertions at the Confederations Cup in Russia, where he helped the Copa America champions reach the final.

He was due to start training on Sunday while his team-mates took part in the Emirates Cup, but his return has been delayed as he is suffering from flu.

Speculation that Sanchez was avoiding returning to Arsenal was rife after he posted a picture to Instagram on Friday morning.

The 28-year-old was wrapped in a scarf and looked miserable as he captioned the picture “sick”.

His Emirates Stadium future remains up in the air as he enters the final season of his current contract, with talks on a new deal seemingly at an impasse.

But Wenger, who has insisted he would rather allow Sanchez to leave for free next summer rather than sell him this year, confirmed the forward is ill and that he will return when he feels better.

“He has flu yes, I had him on text yesterday,” he said.

“He will come back as soon as possible and we were in touch with him and his doctor and he has no basic problem apart from the fact that he should come back tomorrow, but he comes back on Tuesday.

“Your job (as journalists) is to be suspicious. Your job is built on mistrust and mine is built on trust. So that’s why I prefer my side.

“He’s flying back as soon as he’s in a position to fly back. He has flu and that’s a question of normally four or five days.”

Asked if there had been developments over Sanchez’s future, he replied: “There’s no development – he is staying, of course.”

Sanchez is not the only player whose deal expires at the end of the season, with Mesut Ozil, Kieran Gibbs, Alex Oxlade-Chamberlain and Jack Wilshere among those reaching the end of their contracts.

Wenger signed a new deal himself at the end of last season after months of speculation, but he believes the future of his players will not affect on-pitch performances.

“The players who have one year of contract have to respect their contract and play out their contract. For a manager it’s a bit different because it concerns more what is the future of the club.

“The players were thinking ‘what’s going on and what’s happening?’, so it creates uncertainty because it’s a global policy. I am responsible for the global policy of the club but for the players it is different.”

Wenger was talking after watching his side win 5-2 against Benfica in the Emirates Cup.

Theo Walcott hit a brace with Olivier Giroud and Alex Iwobi also on target while Lisandro Lopez scored an own goal.

Lacazette and Kolasinac remain the only two new arrivals so far this summer but Wenger said the Gunners are still looking to add more recruits, even though he would not be drawn on a move for Monaco forward Lemar.

“We don’t speak about how the negotiations go,” he said when asked about the France international.

“We come out once the player is done or not done. I can’t tell you that. But at the moment there is nothing special to say in this case. We are still active on the transfer market in general.”

A pitch invader halted proceedings in the first half of the game before he was accosted by the stewards.

Wenger approached the culprit as he was being dragged away and explained afterwards that he wanted to know the logic behind the decision to break on to the pitch.

“I saw that the stewards caught him in a bit of a strong way and I just said calm down,” he said.