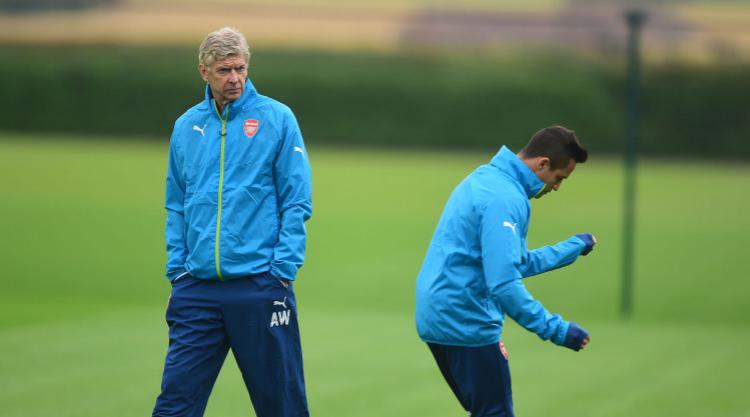 Alexis Sanchez could return to the Arsenal team for their Premier League trip to face rivals Liverpool as manager Arsene Wenger says he is unaffected by transfer rumours concerning the Chilean.

Forward Sanchez, with less than a year remaining on his current deal at the Emirates Stadium, has been consistently connected with a move away this summer.

He could walk away for free at the end of the current season if no new deal is agreed but Wenger has insisted several times Sanchez will not be sold, although links with Manchester City persist.

The fact Sanchez has missed Arsenal’s opening three games of the new campaign has only fuelled rumours he is set to depart, but now Wenger is ready to involve him at Anfield.

A combination of illness and an abdominal strain saw Sanchez sit out the Community Shield win over Chelsea and Premier League games against Leicester and Stoke – the latter game seeing the Gunners slip to a 1-0 defeat.

Coincidentally, it was at Liverpool last season where Wenger shocked supporters with his team selection as he dropped Sanchez to the bench for a 3-1 loss.

The Frenchman is ready to use Sanchez this time out, following his return to fitness.

“Alexis has worked very hard to be back again and he is available,” said Wenger.

“He works very hard, is focused and gives absolutely everything. He loves to play so much that it is sometimes difficult to stop him but he looks absolutely ready.

“He has not played for a long time so I will have to decide what I do with him but he looks ready to play.”

While other high-profile Premier League transfer targets have been left out of their respective sides at the start of the term, ahead of the August 31 deadline, Wenger is unconcerned about Sanchez having his head turned by a move.

“He has always been focused on his job, he loves to play football and I don’t think he is too disturbed by all the noises that happen,” he said.

“Players at that level are used to it now, some deal better with it than others but I don’t think he is too bothered by that.”

Arsenal have been heavily linked with a move for Monaco’s Thomas Lemar during the window, potentially as a replacement for Sanchez if he were to depart.

But Wenger conceded on Thursday that the France international will not be making the move across the Channel as the Ligue 1 champions face losing some of their other title-winning stars.

“It’s dead because Monaco have closed the door,” he said.

“They are still on cases like (Kylian) Mbappe and Fabinho. They’ve already lost Benjamin Mendy, Bernardo Silva and Tiemoue Bakayoko, so Monaco are at a stage where they have closed the door.”

Wenger, who signed his own two-year renewal with Arsenal in May, has several players who, like Sanchez, have contracts that expire in 2018.

One of those is England midfielder Alex Oxlade-Chamberlain – linked to Chelsea – but Wenger is adamant the 24-year-old remains a key member of his squad moving forward.

Asked whether reports of a meeting with Oxlade-Chamberlain to thrash out his future were organised for later in the day, Wenger replied: “We all have our agendas that are quite busy but we do not publish them. Some people look better informed than I am!

“My secretary has my agenda, I will check what I have to do today.

“I want him to stay and be one of the big players of the future of this club. He is one of the players this team has to be built around in the future.

“Personally I want him to commit to the club and to be one of the carriers of the values of our team.”