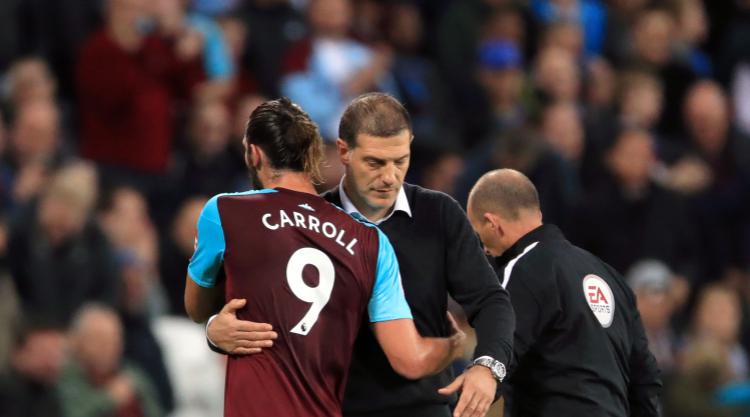 The Hammers lifted some of the pressure on Bilic with a 2-0 win over Huddersfield on Monday night to collect their first points of the season.

“It’s been tough but the lads are behind the manager. We went out there and fought and we got the two goals.

“It’s been a tough road for us but we played our hearts out and got the three points.”

Bilic, feeling the heat after West Ham lost their first three matches, was able to hand Carroll his first appearance of the season.

The injury-hit striker had been out since April with a thigh problem but is determined to put fitness issues behind him.

“It’s nice to be back on the pitch,” he told West Ham’s website.

“It’s been a long time over the summer. I’ve been working hard in training and it’s paid off. I’m feeling good.

“It’s been tough but I’ve worked hard and now I’m back. Hopefully all the misery is behind me.”

Huddersfield kept hosts West Ham at bay until the 72nd minute when Pedro Obiang’s shot took a huge deflection off Mathias Jorgensen and looped into the net.

Substitute Andre Ayew struck from close range five minutes later to condemn Town to their first defeat of the season.

They were also the first goals keeper Jonas Lossl has let in this season, much to the Dane’s irritation.

“I’m really annoyed that the goals came like they did,” he told HTTV.

“But in the end we were not good enough so we need to look in the mirror, look at our mistakes and rise again.

“It was a close game but in the end we could not expect more than a draw.”