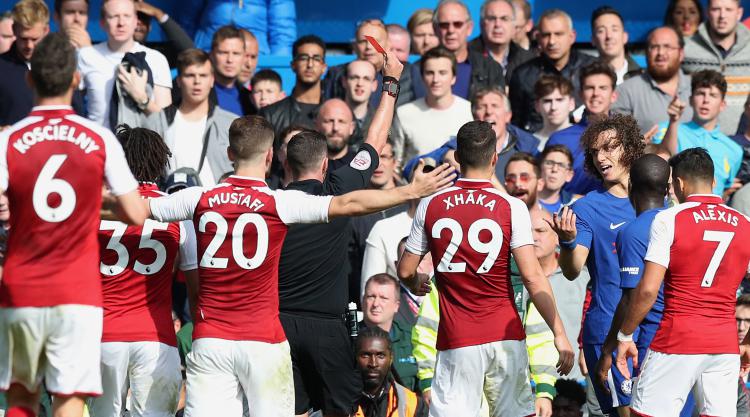 It was as frenetic and entertaining as a goalless stalemate could be, with David Luiz sent off late on for a poor challenge on Sead Kolasinac which saw both benches rise to their feet.

Arsenal had the better chances, the best when Alexandre Lacazette shot wide after Aaron Ramsey had hit the post.

Danny Welbeck should also have done better than head wide in a first half which saw Petr Cech save well from Pedro.

Arsenal still have not won in the Premier League here since October 2011. In the six games since the Gunners have lost by an aggregate of 15-2, but this was the first time there has been parity.

Arsene Wenger’s men are still chasing a first away win against the established top six since January 2015 at Manchester City, but this was much improved following the 4-0 loss at Liverpool in their most recent away game.

Alexis Sanchez was left on the bench by Wenger, having played 90 minutes in Thursday’s win over Cologne and Mesut Ozil was out altogether with a knee problem.

Chelsea made three changes following Tuesday’s rout of Qarabag, with Luiz, Victor Moses and Alvaro Morata back in and Eden Hazard once again on the bench.

Chelsea pressed Arsenal deep into their own half in the opening skirmishes and had half-chances, but after 15 minutes the Gunners broke.

Hector Bellerin surged down the right and crossed for Welbeck. The England forward’s header went wide of the post when he should have scored.

Moments later came another chance for the visitors as Bellerin pulled the ball back for Lacazette, whose deflected shot was held by Thibaut Courtois.

Courtois was soon afterwards only able to repel Kolasinac’s powerful shot, fortunately to a Chelsea player.

Cech stayed on his feet to deny Pedro after the Spain forward had been played through one-on-one by Cesc Fabregas as Shkodran Mustafi tried to claim offside. Pedro had only moments earlier returned to the field after requiring treatment.

Morata headed over a hopeful cross from Moses as the Blues burst forward again, but Arsenal were slowly gaining parity.

Ramsey barged by Cesar Azpilicueta and Luiz before prodding a shot against the post. Lacazette should have tucked in the rebound but it went wide, much to Arsenal’s frustration.

Mustafi was second best in his battle with Morata and missed a chance to head clear Gary Cahill’s long ball. Nacho Monreal covered, but hit his back pass ferociously and Cech did well to control it on his chest.

Luiz finished the half requiring treatment on his wrist after clattering the advertising hoardings and returned with his left arm bandaged.

Luiz caught Laurent Koscielny in the face when attempting an overhead kick and was booked as Chelsea resumed on the attack.

Tiemoue Bakayoko was a half-time replacement for Pedro, with Fabregas pushing forwards, and powered through Arsenal with a strong run which broke down.

Mustafi headed in, but was offside from the free-kick as the contest entered the final 15 minutes.

Arsenal had turned to Alexis Sanchez and Chelsea to Hazard by then.

Hazard had a shot held by Cech, but the decisive strike never came.

And, for a third straight competitive game against Arsenal, Chelsea finished with 10 men as Luiz was shown a straight red card for a lunge on Kolasinac.