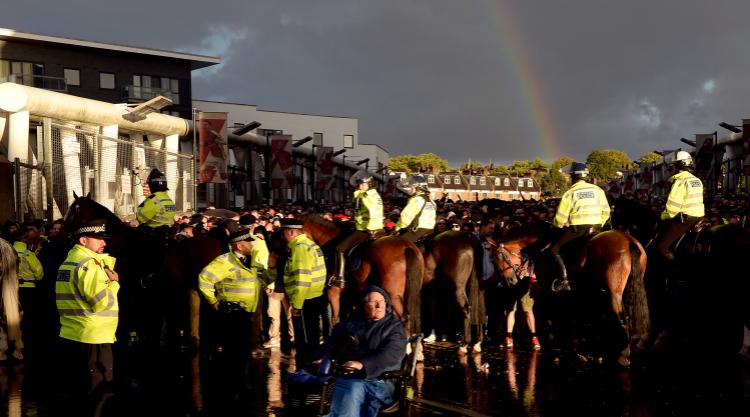 Arsenal’s Europa League tie with Cologne has been delayed by an hour in the interest of fan safety.

Thousands of ticketless Cologne supporters turned up at the Emirates Stadium and those fans with tickets were unable to gain access to the ground.

The 60-minute delay was announced inside the stadium with Arsenal “monitoring” the situation.

Hundreds of Cologne supporters were being held behind a police cordon as order was being restored in and around the away turnstiles.

No further delays were anticipated but another problem occurring was the number of away fans attempting to enter the home sections of the stadium with legitimate tickets.

Earlier on Thursday, Cologne supporters flooded into central London as around 20,000 fans of the Bundesliga side were expected in the capital despite o nly 3,000 tickets being available.

Fans took to the streets in their numbers, with social media posts showing hordes of supporters singing and marching around Oxford Circus hours before the scheduled 20:05BST kick-off.

Ahead of the delay, Arsenal’s official website warned Cologne fans they faced being asked to leave the stadium if they purchased tickets in the home sections of the ground.

”Please note visiting supporters that purchase a ticket in the home end for this fixture are likely to be ejected from the stadium,” a statement on their website read.

Cologne currently sit bottom of the Bundesliga having lost all three of their league games so far – but they reached the Europa League having finished fifth last season.

Head coach Peter Stoger was asked on the eve of the game if he had a message for the thousands of fans making the trip, to which the Austrian replied: ”Enjoy the pubs!”