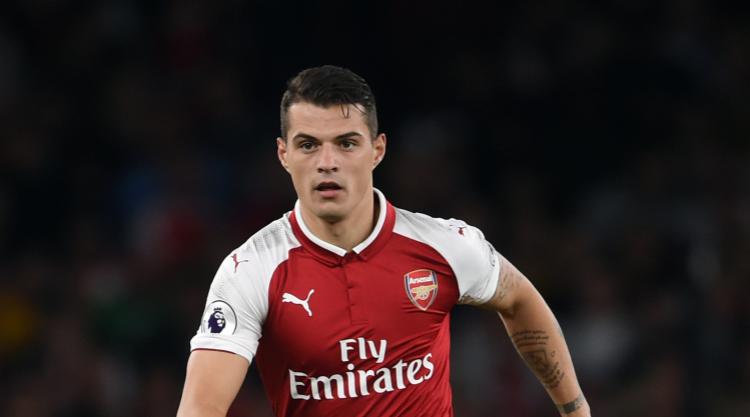 Granit Xhaka has proved he can mix it with the hardest opponents the Premier League can offer but now the Arsenal midfielder wants to show there is another side to his game.

The 24-year-old earned mixed reviews for his debut season in England last year as his performances were inconsistent and his discipline record poor.

When Xhaka was sent off in a 2-1 win over Burnley back in January it was his second dismissal of the campaign and a ninth in three years.

The Switzerland international also picked up 12 bookings, including a run of five in five games, which led to Arsenal boss Arsene Wenger questioning his style of tackling.

But, having shifted into a more orthodox midfield role since Wenger adapted his formation at the tail-end of last season, Xhaka is starting to show the type of form which saw the Gunners fork out a reported fee in excess of Â£30million to bring him in from Borussia Monchengladbach.

Xhaka admits he is feeling more comfortable with his Premier League surroundings as he looks to impose himself in a different way moving forward.

“I think every player needs time to adjust to a new league, a new country and new team-mates,” he said.

“The back end of last season I already felt good and I am feeling more comfortable now and want to help the team as much as I can this season as well.

“I know it has been criticised but my style of play is to be aggressive. My two red cards can be discussed, were they necessary or not, but I am hoping to have less cards this season and build on the end of last season where I already had less.

“I’m a player who likes to have the ball, dictate the play.

“The fans knew that and the club did too, that is probably why they got me but there is another side to my game as well – that is being aggressive and fighting in the duels.”

Xhaka set up two of the Gunners’ goals in their scintillating 4-3 opening day win over Leicester and earned the plaudits of former Arsenal favourite Thierry Henry.

“Granit Xhaka has it in his locker to play that ball over the top,” he told Sky Sports.

“He has an amazing left foot. If he has time on the ball he does not need to play through the middle sometimes.

“Why do you want to play what I call ‘the Arsenal ball’ to the winger who comes in the pocket? Why don’t you play the other ball?

“That’s where we want to go. Can he play that pass? It is not difficult for Xhaka. They are going to have to learn with (Alexandre) Lacazette.”

Xhaka watched Henry’s analysis of his performance and was pleased that he was shown in a positive light.

“I heard that and it is an honour for a player like Thierry to say that about me and give me that compliment,” he said.

“I watch the analysis and saw the comments, of course for me it is my aim to get Lacazette in the game as well as all the players in front of me, in the next few weeks hopefully it’ll get better and I can do that.”

After impressing in the win over the Foxes, Xhaka is likely to retain his place for Saturday’s trip to Stoke.

While the Potters may not pose the same physical threat as they did on their arrival into the top-flight, Xhaka is prepared to get stuck in if the going gets rough.

“I say things on the pitch, play in an aggressive style and I think I am suited to football in England.

“I think I have shown since I have been here that I am someone who likes having the ball, dictating the play, looking for my team-mates. I’m what we call a ‘six’ in Germany, a quite aggressive, deep-lying playmaker.

“Last season we won 4-1 at Stoke and played really well and we know what to expect and are ready for it.

“We know how strong they are, they have a lot of aggression in their game but I’m sure if we play our game, do what we do, we can win.”