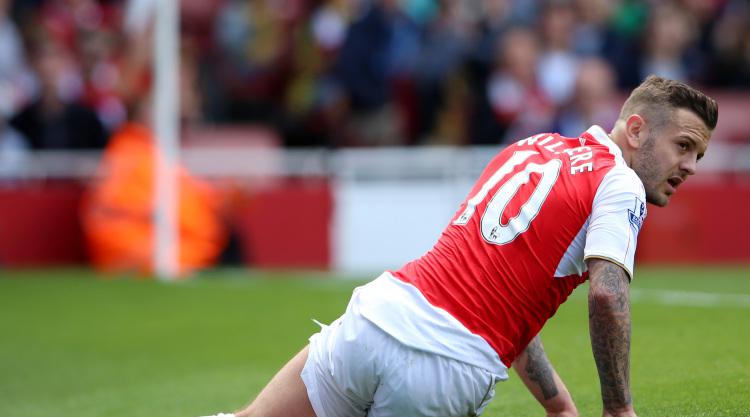 Arsenal midfielder Jack Wilshere was shown a red card after being involved in a mass brawl during the under-23s match against Manchester City at the Emirates Stadium.

Wilshere has yet to play for the Gunners in the new Premier League season, having spent the last campaign on loan at Bournemouth.

The 25-year-old – now fit again following his recovery from the fracture to his lower left leg suffered during Bournemouth’s 4-0 defeat at Tottenham in April – was drafted into Steve Gatting’s side on Tuesday night, along with fellow first-team squad players R ob Holding and Ainsley Maitland-Niles.

Wilshere had helped set up one of the goals as Arsenal were leading 4-1 during the second half before he was on the receiving end of a heavy tackle from City midfielder Matthew Smith.

After getting to his feet, Wilshere squared up to Smith before pushing him in the chest.

The fracas then saw City defender Tyreke Wilson run to the centre circle to confront Wilshere, the two players grappling each other around the neck before further team-mates from each side became involved in shoving as tempers boiled over.

Once calm was eventually restored, the referee brandished the red card to both Wilson and Wilshere.

Arsenal went on to win the match 4-3.

Speaking in August, Gunners boss Arsene Wenger made it clear Wilshere, who is in the final season of his current deal, remains a part of the first-team picture.

“At the moment, yes. I think I plan for him to be here for the whole season, after that we will see at the end of the season,” Wenger said.

“He has the talent to be regular, but he has to come back to competition in a consistent way.”