An award-winning artist died suddenly at home while 25 weeks pregnant, just weeks after under going a cardiogram for a heart murmur she had since a child, an inquest heard.

Francesca Lowe, 37, was found collapsed in the bathroom of her Stoke Newington home by her husband, artist Gavin Nolan, on the morning of January 23 this year.

In the two days before her death she had suffered the winter vomiting bug norovirus.

Poplar coroners’ court heard that an ambulance arrived within seven minutes, but despite attempts to revive  Ms Lowe she was pronounced dead at the scene.

Ms Lowe studied at the Royal Academy Schools and exhibited her work in London, New York and Beijing. 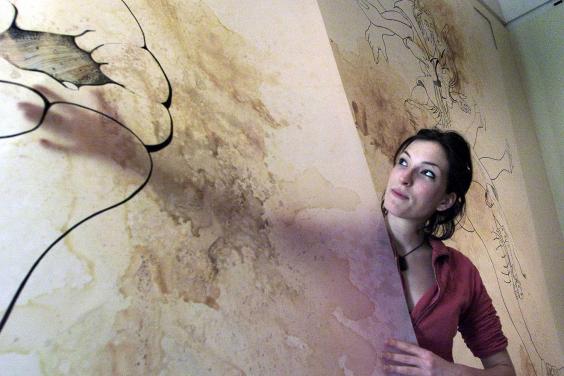 She represented the UK at the Beijing Biennale at the National Art Museum in 2008 and won the Red Mansion Prize in 2003, and the Deutsche Bank  Pyramid Award for Fine Art the following year.

In a short witness statement read to the court Mr Nolan said: “I woke up and went to the toilet and saw Francesca there. I touched her and she was cold. I pulled her into the hallway and started with CPR before calling the ambulance.”

The inquest heard toxicology found no trace of drugs or alcohol in her system. During her pregnancy she was referred to a cardiologist at Homerton Hospital as a precaution for a heart murmur which she had had since she was seven.

During her first pregnancy in 2012 she had an echocardiogram which found she had mitral valve prolapse in her heart, which was also detected in the latest scan.

The inquest heard that as a result of the cardiogram results, the technician who carried out the test escalated the case to the cardiologist team, which then reviewed Ms Lowe’s case on  January 11.

The inquest also heard from pathologist Dr Ula Mahadeva, who said Ms Lowe’s heart was examined by an expert in cardiopathology.

She said: “The expert pathologist found significant disease of the mitral valve and she also found scarring in the left ventricular.

“This pregnant lady died as a result of degenerative changes in the mitral valve.”

As a result the cause of death was attributed to cardiomyopathy, contributed to by the fact she was pregnant and had suffered from norovirus shortly before her death.

Assistant coroner Edwin Buckett adjourned the inquest to resume on a date in September yet to be set, when the inquiry will hear more expert evidence.