Justin Trudeau held a baby with the same name as him, in a series of pictures which have been met with adoration from his fans around the world.

Two-month-old Justin-Trudeau Adam Bilal was pictured gently clasping the thumb of the Canadian prime minister, who hugged the baby to his chest.

Little Justin-Trudeau​ is the son of Syrian refugees and was given the same name as him as a “thank you” gesture.

His parents Afraa Hajj Hammoud and Mohammed Belal arrived in Calgary, Canada, in February 2016 as Mr Trudeau’s government threw open the country’s doors to tens of thousands of Syrians. 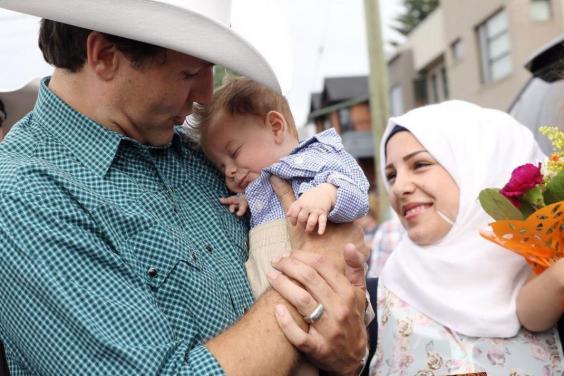 Adorable: Justin-Trudeau Adam Bilal with his older – and rather famous – namesake

They had fled from Syria about five years beforehand, spending three years in Lebanon.

The baby’s name made a break from the Syrian ones given to their two older children Naya, 4, and Nael, 3.

In an interview with CBC News, Ms Hammoud said of Mr Trudeau: “I love him, because he knows what humanity means.”