Archaeologists have lifted the lid of an ancient Roman sarcophagus unearthed at a building site near London‘s Borough Market.

The 1,600-year-old stone coffin, discovered at Swan Street, Southwark, is thought to contain the remains of a mother after the bones of a baby were found nearby.

An amazing series of photos shows excited archaeologists peeking inside the sarcophagus on Tuesday.

Small bones and a broken Roman bracelet were meanwhile found in the surrounding soil, hinting to who the tomb was made for. 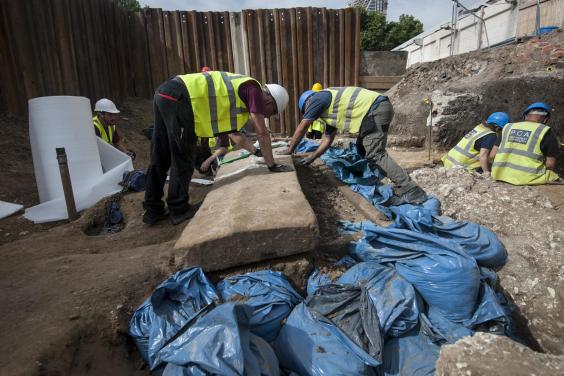 Diggers found a bracelet and small bones near the sarcophagus (PA)

The team are not certain whether the infant was buried with the coffin, however, as it appears to have been opened by grave robbers in an area that was used by the Romans as a burial ground.

Gillian King, senior planner for archaeology at Southwark council, said a large crack on the lid was probably the work of thieves.

“It’s been broken into two pieces, probably when robbers broke into it during the post-medieval period,” she said. 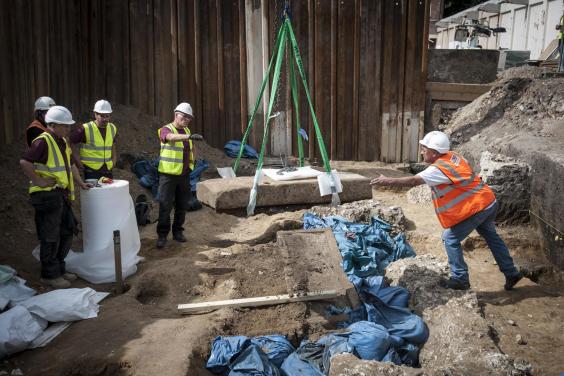 To me! Archaeologists finally take a peek inside the coffin (PA)

“We hope that they will have left the things that were of small value to them but great value to us as archaeologists.

“We always knew this site had the potential for a Roman cemetery, but we never knew there would be a sarcophagus.”

The coffin was found several metres underground at the site last month after the council told developers to pay for an archaeological dig. 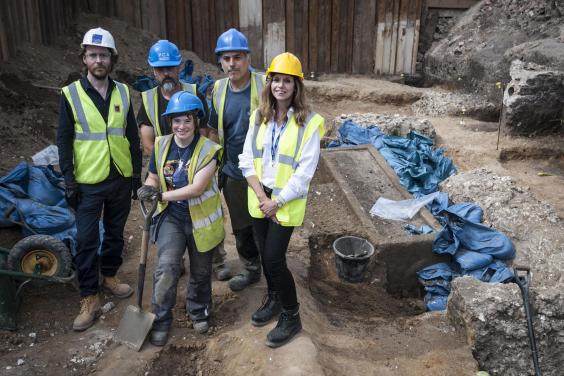 Gillian King, right, senior planner for archaeology at Southwark Council, stands with other archaeologists after they lifted the lid (PA)

Its lid had been slid open, leading experts to suspect it was targeted by thieves back in the 18th century.

The council had asked developers to check the area for ancient finds before it went ahead with building new flats because of the site’s proximity to two large Roman roads.

Strict rules on Roman burials, which had to be outside of town walls, meant the location was a prime spot for historical finds.

Archaeologists discovered the coffin six months into the dig as they were due to finish their search.

They believe it was the coffin of a high-status inhabitant of Roman London, but they will not know for sure until the bones and soil inside are tested and dated.

The sarcophagus will now be taken to the Museum of London’s archive in Hackney for analysis.