BBC Breakfast’s Dan Walker quipped about the “fun day ahead” before the broadcaster published its top earners salaries for the first time, revealing he made the rich list.

Walker’s on-air colleague Louise Minchin looked far from impressed by his comment, which came hours before the revelations caused a storm over a huge gender pay gap.

He is paid up to £249,000, but neither Minchin nor fellow female presenter Sally Nugent appears on the list of BBC stars who earn more than £150,000 annually.

Minchin looked bemused and turned away from her colleague when during a news segment on Wednesday’s publishing of pay deals he said: “It could be a fun day ahead.”

BBC’s drector-general Tony Hall said the corporation needed to go “further and faster on issues of gender and diversity” after it emerged the top-paid male earned more than four times the salary of the highest-earning woman. 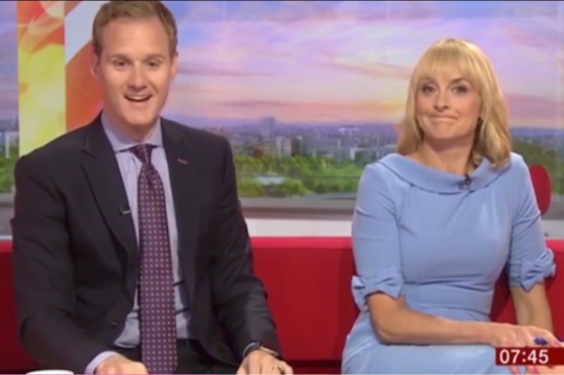 The bumper sum far exceeded the £450,000 to £499,999 for Claudia Winkleman, of Strictly Come Dancing, who also works on radio. Six other men also received pay above Winkleman’s.

Walker later took to social media and defended his salary, after people questioned why there is a huge difference in pay between him and Minchin.

He wrote on Twitter: “BBC exec should really know that we get exactly the same for BBC breakfast. I have another job on Football Focus.”

The presenter’s comments came as Gary Lineker, who was revealed to be the broadcaster’s second highest earner, joked: “where did I put my tin helmet” ahead of the release.

In a pre-emptive tweet, The Match of the Day presenter blamed his salary on competition for stars from other television channels.

He said: “Happy BBC salary day. I blame my agent and the other TV channels that pay more.”