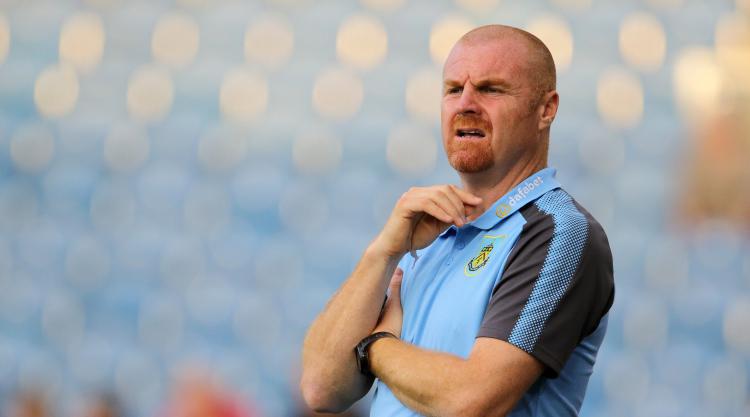 Sean Dyche does not fear being priced out of deals as he looks to add to his Burnley squad before the end of the transfer window.

Having so far been rebuffed in attempts to sign Hull midfielder Sam Clucas and, reportedly, Leeds striker Chris Wood, the Clarets must consider whether to increase their bids in a market where fees continue to rise.

There is money in the Turf Moor pot after the sales of Michael Keane and Andre Gray for a combined figure of nearly £50million, but Burnley’s more modest budget compared to some of their top-flight rivals means they cannot simply throw cash at clubs for replacements.

However, when asked if Burnley were being priced out of the current market, Dyche replied: “Not necessarily. Certain situations are beyond our capabilities, we know that, so we tend to focus on the ones that are within our capabilities and see if we can get them done.

“There’s a structure at the club that although it’s hard to manage sometimes, it’s probably appropriate for this club, for the bigger picture of the future. We work in a market that we think is something we can do rather than worrying about the things we can’t do.

“As long as it’s in what the chairman (Mike Garlick), the board and myself agree is appropriate for this club then there’s no problem. Obviously some things go way beyond that, and for different clubs it’s for different reasons.

“It’s very difficult at times to find a healthy balance. It must be found so we continue to search to do that.

“Usually I know the market we’re in and I definitely know the market we’re not in, both in fees but definitely in wages. Usually we (Dyche and Garlick) are aligned. We try and get the best players possible for what we are. It’s how we work with them when we get them into the camp – are they open minded, do they want to continue improving as individuals?

“As much background as we can get on people is important for me. That’s a key focus.”

Although Burnley are yet to recruit a centre-back in this window to replace Keane and have made no signings since Gray’s exit last week, they responded to fears over their squad’s strength by beating champions Chelsea 3-2 at Stamford Bridge on Saturday.

James Tarkowski has long been seen as the heir apparent to Keane and Sam Vokes’ brace, which took his tally to seven in his past six, showed that maybe the Clarets do possess the requisite fire-power in Gray’s absence.

And Dyche is confident in the depth he currently has at his disposal, even if the group is not supplemented with additions this month.

“I’ve got a squad here who I believe in,” he added.

“If we can get competition by adding players we will. If not, we’ll be looking at what’s here.

“I said w ith Andre going that’s a great opportunity for someone else and then Vokesy scores two, he was our top scorer in the league last year.

“Ideally we want to keep supporting the group and keep growing, if that doesn’t happen we’ll continue to work as we have done in the past with the players we’ve got and continue doing everything we can to develop them as individuals and as a team.”