London Fire Brigade said 10 fire engines were at the scene of the fire that broke out in the early hours of Monday.

Dramatic footage showed flames raging as smoke billowed into the air, visible from miles away.

The brigade appealed for people to “please avoid the area” while they tackle the blaze at the popular north London market. 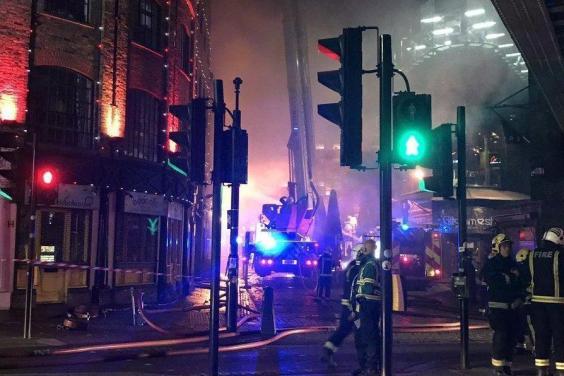 Camden Lock: More than 70 firefighters were called to the blaze (London Fire Brigade)

One witness tweeted: “On a night bus I just passed the start of a big fire in Camden, now at Euston I’ve seen lots of ambulances head north.”

Another said: “Just drove past Camden market and there’s a huge fire on top a building, close to the Loch Bridge! Crazy, crazy scenes.”

A Metropolitan Police spokeswoman said: “Police were called on Monday at 12.10am to Camden Lock Market to reports of a fire.

A large fire destroyed a huge section of London’s famous Camden market in 2008.