It’s not such a touchy subject at the palace as it used to be.

In medieval times a slight against the monarch could result in the offender being marched out to the Sovereign’s gaze for a stint in the Tower of London.

Nowadays, it seems, the main protectors of strict “royal protocol” are the excitable British tabloids who are quick to take offence or self proclaimed etiquette “experts” they consult to get an “in a fury” quote.

It comes after Canada’s Governor General touched the Queen as she ascended steps in London.

It’s true Royal etiquette seems to suggests Her Majesty shouldn’t be touched by officials who meet her.

But in reality such protocol has been broken several times without drastic official reaction or consequence.

Most recently was when the then US First Lady Michelle Obama was said to have done so in 2009.

The Royal Family website says bluntly: “There are no obligatory codes of behaviour when meeting the Queen or a member of the Royal Family.” 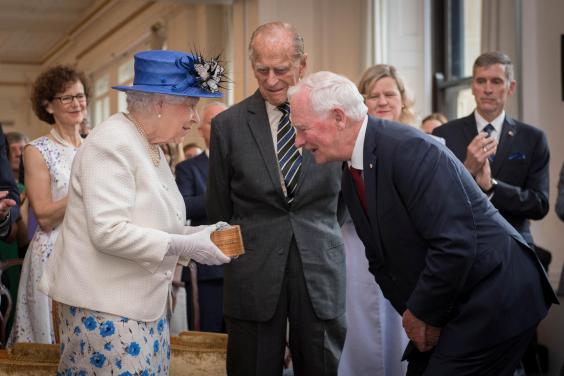 The Queen at Canada House. (REUTERS)

As regards to touching, it says members of the royal family should not be touched in a manner that goes beyond a formal handshake — a guideline that likely dates back to the Middle Ages.

Royal author and TV presenter, professor of history Kate Williams of Reading University, points out that “monarchs were divinely appointed to rule by God, so they were kind of seen as gods, so they demanded to be treated as gods.” So definitely no touching back then, unless it was the monarchs who did the touching first.

In 1992, Australian Prime Minister Paul Keating caused a rumpus “Lizard of Oz” for putting his arm around the Queen. Keating’s successor, John Howard, reportedly did the same thing, in 2000.

The Queen and Duke of Edinburgh visit Canada House in London

In truth it it really does depend on who does the touching, how well the Queen knows them and the circumstance.

In Mrs Obama’s case the Queen was not bothered about it in the slightest – and the two women got on really well.

In reality, as a senior palace aide once told me, “It takes quite a lot for Her Majesty to take offence.”