The parents of Charlie Gard have taken the decision to end their legal fight over treatment for their terminally ill child.

Representing the family, Grant Armstrong told Mr Justice Francis: “This case is about Charlie and for Charlie it is too late. Time has run out.

“Irreversible muscle damage has been done. The treatment now offers no chance of success.

“In light of that fact the parents have taken the extremely hard decision with their legal advisors … to withdraw their application.”

Mr Armstrong said Charlie was assessed last week and the parents were given the bad news on Friday.

He also said had the treatment been authorised earlier it may have been successful.

The couple felt that continuing their fight would cause the boy pain, according to Mr Armstrong as he said the case was “worthy of a Greek tragedy”.

Mr Armstrong said Charlie’s parents hoped to set up a foundation and wanted lessons to be learned.

The announcement came after Connie Yates and Chris Gard, both in their 30s and from Bedfont, west London, arrived at the Family Division of the High Court looking close to tears.

Mr Justice Francis, who has overseen their legal battle for the right to take their baby to the US for treatment, had been scheduled to analyse what the couple said was fresh evidence at a two-day trial starting at 10am on Monday.

He said he aimed to make a decision on Tuesday and questioned whether a two-day hearing would be long enough. 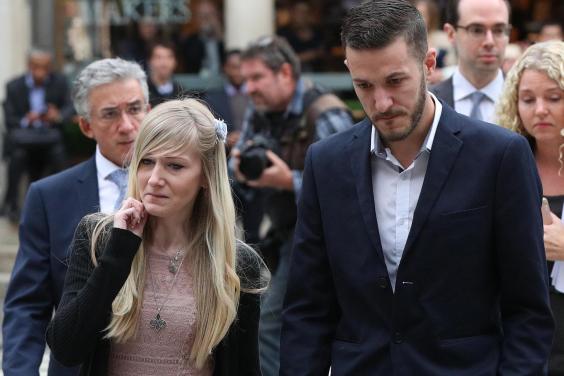 But the hearing was re-listed and is scheduled to start on Monday afternoon. Lawyers have given no explanation for the scheduling change.

The parents arrived for the hearing without comment as about 20 supporters gathered with megaphones, blue balloons and banners.

The group, part of the “Charlie’s Army” movement, chanted slogans and cheered when passing cars beeped their support.

Mainly women and children, they filled the road outside court with choruses of “Trump, the Pope, they all have hope” and “We love you Charlie, we do, oh Charlie we love you.”