The parents of Charlie Gard told a judge today he was wrong to rule their baby had “irreversible” brain damage, as they made a last ditch plea to save their son’s life.

Chris Gard and Connie Yates want their 11-month-old son, who suffers from a rare genetic condition and has brain damage, to be allowed to go to the United States for a therapy trial.

At the High Court this morning, Grant Armstrong, acting for the parents, told the judge he had been “in error” when previously assessing key medical evidence in Charlie’s case. 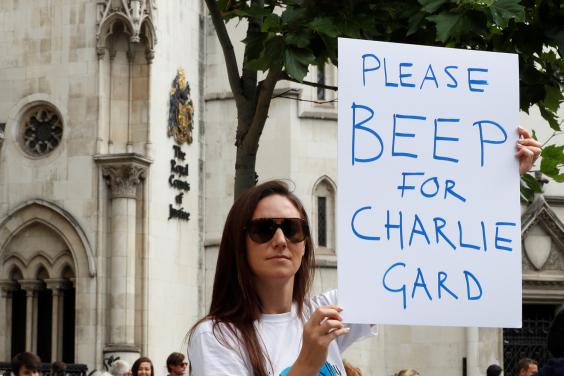 “It is a matter which causes very deep concern, that at the heart of my Lord’s judgement is the suggestion of irreversible and irreparable brain damage,” he said.

“We say that’s a contention, where the evidence does not properly support that contention.”

Judge Francis was this afternoon hearing evidence from an American doctor, referred to as a “world authority”, who is proposing experimental treatment to Charlie’s condition, a mitochondrial disease which causes progressive muscle weakness and brain damage.

The court heard the doctor believes there is a 56 per cent chance of “muscular recovery”, and a 90 per cent chance that the treatment can “cross the brain blood barrier” and offer the possibility of successful treatment.

The US doctor’s expertise was first offered through an intervention by President Donald Trump, whose officials at the White House contacted the British hospital, the court heard.

At the start of today’s hearing, Judge Francis told the parents, from Bedfont, in west London: “We all want what is best for Charlie – if there’s important new evidence that suggest my decision should be changed then I will change it.”

However, he warned that he will only consider allowing Charlie to go to therapy in the US on the basis of new evidence, rather than arguments that have already been dismissed by himself and the Court of Appeal.

“I have made it clear I will welcome new evidence not available to me in April, but what I can’t do is reopen issues already dealt with, not only by me but by the Court of Appeal,” he said.

And after Mr Armstrong suggested the case is a matter of public debate across Britain, the judge added: “Comments by people who know nothing about the case are probably not very helpful.”

The judge is not expected to make a final ruling today.

He told the parents he will clear court time so that the matter could be resolved as swiftly as possible.

In his April ruling, the judge found that the experimental US therapy, known as nucleoside, would not reverse structural brain damage.

“I dare say that medical science may benefit, objectively, from the experiment, but experimentation cannot be in Charlie’s best interests unless there is a prospect of benefit for him,” he said.

However, Mr Armstrong said today he believed the treatment had been misjudged and rejected the suggestion that Charlie was being “experimented on”.

Katie Gollop QC, for Great Ormond Street hospital, earlier argued that Charlie could suffer “significant harm” if he is moved to America and said the treatment would offer “no benefit”.

In a statement outside court prior to the hearing, the family revealed they have raised more than £1.2 million to pay for US therapy if approved.

“We are continuing to spend every moment, working round the clock to save our dear baby Charlie,” they said.

“We’ve been requesting this specialised treatment since November, and never asked the hospital, courts, or anyone for anything – except for the permission to go.