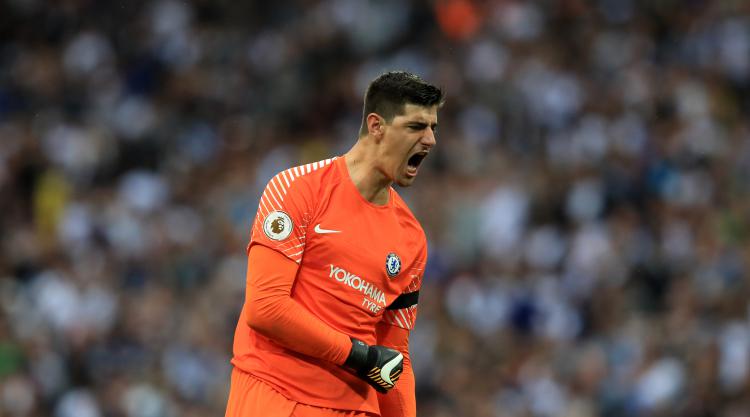 Thibaut Courtois has warned Tottenham that opposing teams will raise their game at Wembley – and also poked fun at the lack of atmosphere at their temporary home.

The Belgium international goalkeeper was part of the Chelsea side which won 2-1 under the arch on Sunday as Tottenham’s season at Wembley started with defeat.

Mauricio Pochettino’s side will play all of their home games at the national stadium this season as their new ground is completed on the Whit Hart Lane site.

Spurs have now won just one of their last 10 matches at Wembley, losing seven in the process, after a Marcos Alonso brace was enough to give reigning champions Chelsea victory.

Courtois was beaten by his team-mate as Michy Batshuayi’s own goal had drawn Spurs level for a spell and the 25-year-old reckons all Tottenham’s rivals will be at their best when they travel to Wembley.

“Wembley is an amazing stadium,” he said. “These stadiums make you want to play even better, it is like a Champions League game where you can rise above yourself.

“I think those stadiums make that and all the teams that come here, instead of being impressed, they will give more so for Spurs it won’t be easy but if they have their fans, with 80-90,000 people they can make it difficult for a lot of teams.”

There were a number of surreal moments in the first half as the crowd appeared baffled by the fact a drummer had been microphoned up to the public address system around the ground.

His drumming was aimed at raising the atmosphere from the home fans but instead led to derision from Chelsea supporters and the majority of those posting on social media.

Courtois questioned why such a gimmick was required for an occasion such as a London derby and that the added distance between the pitch and the stands makes for a less intimidating experience.

“It feels a bit different because obviously their home ground is not this one,” he said. “They have the capacity now to bring a lot of fans into the stadium.

“If they make more noise it would be better for them but in the first half, if you have to put some noise over the speakers to make some atmosphere, I don’t think it is working very well.

“In the second half they were pressing and 70,000 people started to wake up and there is obviously more than the 40,000 at White Hart Lane.

“The only difference is that they are more separate from the pitch than at White Hart Lane, when you feel more pressure when they are pressing and the pitch is smaller, that is probably better for them.”