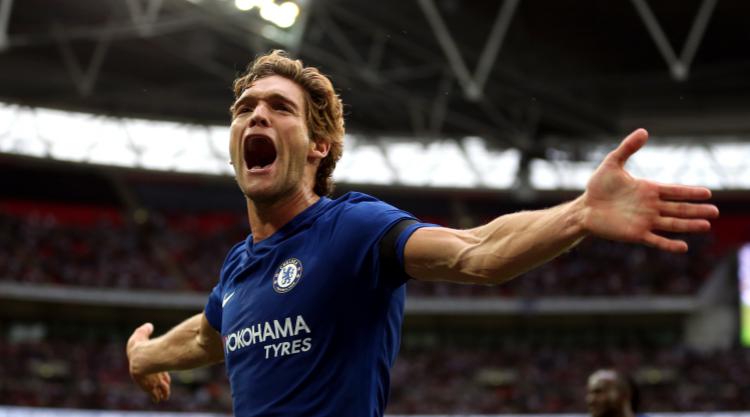 Marcos Alonso scored an 88th-minute winner after Michy Batshuayi’s own goal had cancelled out the Spaniard’s earlier free-kick as Chelsea responded from the humiliating opening loss to Burnley.

Tottenham laid siege on the Premier League champions’ goal at times, but now have just two wins in 11 attempts since Wembley reopened in 2007. And the national stadium is their home this season.

“To play against Tottenham, away, and to win is a fantastic result. It’s not easy,” Conte said.

“I want to thank my players. Every one. I saw today the fighters.

“I saw a lot of positive things in a moment that’s not easy for us with the suspensions and the injuries.

“I’m very happy when I see this type of game. I’m not speaking about football, but this spirit, this heart, this desire.

“This season we started with the first half not so good against Burnley but, in the second half, they showed me again a great spirit. We tried to change the final result and scored two goals with 10 men and nine men.

“We have to continue to consider there are great difficulties in this season, but the only way we can get through these difficulties is to work.”

With Diego Costa in exile, Eden Hazard still recovering from a broken ankle and a thin squad following sales, loans and suspensions, Conte says Chelsea showed the spirit of champions on the field.

Conte added: “We showed great desire to stay compact, not lose the balance. To show, also to be the champions. It was very important, this.”

Premier League debutant Andreas Christensen was alongside new boy Antonio Rudiger in defence in a Chelsea side deprived of the suspended Cesc Fabregas and Gary Cahill.

And Conte reserved particular praise for Brazil defender David Luiz, who was deployed in midfield alongside Tiemoue Bakayoko.

“It was an amazing performance from David,” the Italian added.

“He played with great experience, with great personality. I think he was a point of reference for the other players.”

Bakayoko was making his debut after signing from Monaco while nursing a knee injury.

Conte added: “Sometimes the motivation brings you to get over your physical condition.”

Matchwinner Alonso, with eight goals, has scored more than any other defender in English football since his arrival. But Conte wants more.

Conte added: “I’m not surprised. Alonso missed a lot of other chances to improve his (tally last season).

“For me, the wing-backs are the real wingers. Sometimes they must become strikers.”

Tottenham completed an entire league season unbeaten at White Hart Lane last term for the first time in 52 years, including a January victory which ended Chelsea’s 13-game winning run in the league.

Conte revelled in the atmosphere and Pochettino refuses to believe Wembley was a factor in the loss. Spurs will play at the national stadium as the construction of the new White Hart Lane is concluded.

“Wembley was not the problem,” Pochettino said.

“I think the ‘Wembley effect’ is not the reason we lost the game.

“It doesn’t affect me. But I understand that we need to talk, everyone needs to talk.

“I am disappointed because I think we deserved more,” he added.

“Our performance was good. We were much better than Chelsea. But they were clinical in front of goal. They shot twice and scored twice. For us, it was difficult to score.”