The London rapper tweeted his heartbreak at hearing of the famous frontman’s death, whose body was reportedly found at a private residence in Los Angeles on Thursday.

Musicians and fans shared their shock and sadness at hearing the news, as people took to social media to pay tribute to the star.

Mr Bennington, 41, was found dead in a suspected suicide, the Los Angeles County coroner has said.

Linkin Park co-founder Mike Shinoda has said he is “shocked and heartbroken” by the death of his close friend and bandmate.

He tweeted: “Shocked and heartbroken, but it’s true. An official statement will come out as soon as we have one.”

Stormzy posted on Twitter shortly after the news broke, writing: “I am heartbroken you do not know what someone’s going through serious. Prayers up for your family right now my brother.”

The date of Bennington’s death, July 20, also marks what would have been the 53rd birthday of one of his close friends, former Audioslave and Soundgarden singer Chris Cornell, who died in May this year. 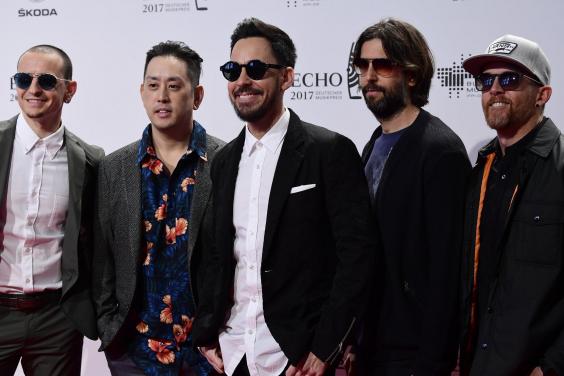 Linkin Park recently performed in the UK on the European leg of their One More Light world tour, which saw them play to packed stadiums in London, Birmingham and Manchester.

The band released their seventh album, One More Light, in May this year.

Their first album, Hybrid Theory, released in 2000, propelled them to success as it went on to sell 10 million copies.

The band has collaborated with many artists over the years including Jay-Z and more recently, London grime star Stormzy, in a track on their new album called Good Goodbye.

In April this year, while promoting the tour in London, Bennington opened up during a Q&A session following a playback of a few tracks from One More Light.