International trade secretary Liam Fox is urging new consideration to whether chlorinated chicken, banned in the UK, could be made legal to ease the road to a quick trade agreement with the US after Brexit.

The UK has long abstained from importing chicken from the US, one of the largest poultry exporters in the world, because of a law against chlorine-washing the carcasses.

The EU banned chlorine-washed chicken in 1997 over food safety concerns.

Mr Fox has hit out at criticisms in the media, asking British journalists at a conference in Washington DC how they coped when they worked out of the US capital.

“The British media are obsessed with chlorine-washed chickens, a detail of the very end stage of one sector of a potential free trade agreement,” said Mr Fox. 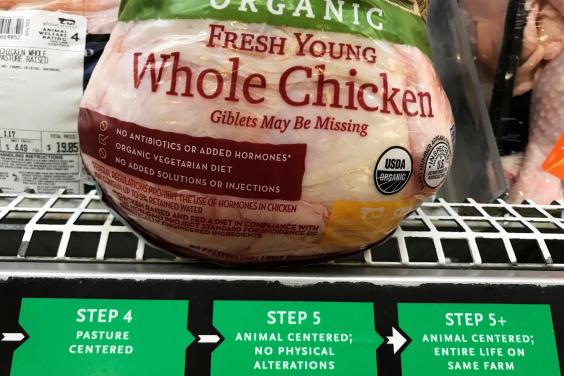 What is chlorinated chicken?

A widespread practice in the US, chlorine-washing involves spraying carcasses after slaughtering with an antimicrobial solution to kill bacteria and other pathogens.

According to right-wing think tank the Adam Smith Institute, it reduces prevalence of salmonella from 14 to two per cent.

What do we do in the UK?

The EU allows washing only with cold air or water.

The UK follows the “farm to fork” approach, reducing salmonella contamination at other stages of processing – not reliant on the get-out of an antimicrobial rinse at the end of the process.

Why are people worried about chlorine washing?

The chlorine wash itself is thought by both the USDA and EU food safety regulator EFSA to be safe when the chicken is consumed in moderation.

But health campaigners say its use encourages poor hygiene practises in farms and abattoirs as workers rely on the chemical to rinse the meat of harmful substances at the end of the slaughtering process.

Why would we want any?

It is thought that in striking a trade deal with the US post-Brexit, accepting chlorine-washed chicken would smooth the way.

The topic has been a big bone of contention in EU-US relations since the 1997 ban, and the row has even found its way to disputes at the World Trade Organisation.

The Adam Smith Institute has made bold claims that importing chicken from the US could cut prices for UK consumers by up to 21 per cent.

Will Liam Fox eat one?

James McGrory of Open Britain said: “If the International Trade Secretary wants the public trust him, he needs to take the opportunity while he’s in the US to devour a chlorine-washed chicken live on camera.

“The choice of recipe is up to him.

“The proof of the chicken is in the eating.

“He must be the only Fox who doesn’t want to eat one.”

But Mr Fox has batted away questions over whether he would personally eat the chlorine-washed meat.