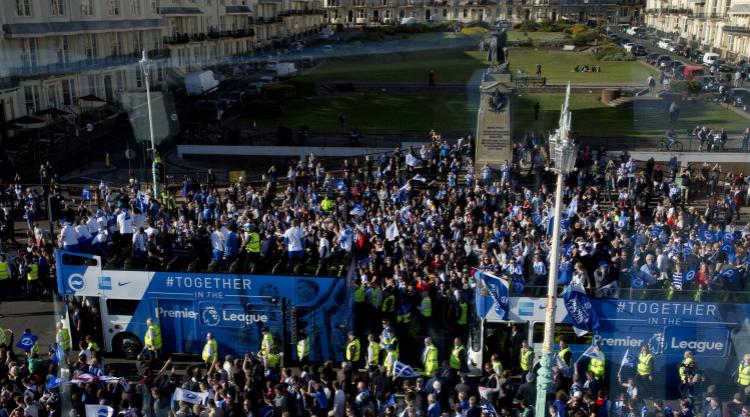 Manager Chris Hughton hopes to give Brighton’s long-suffering fans plenty to celebrate in the Premier League next season and is ready to meet the challenges of the top flight head on.

The south-coast club secured a return among the elite clubs of English football for the first time since 1983 by finishing second in the Sky Bet Championship, missing out on the title to Newcastle after a dramatic finale last weekend.

On Sunday, Brighton celebrated their achievement with an open-top bus parade along the seafront.

Seagulls fans lined the sun-baked streets in their thousands as the convoy travelled from Brighton Palace Pier to Hove Lawns, where the players and staff took to the stage to address another large flock of supporters.

There were plenty of familiar faces among the celebrations on stage to help keep the waiting fans entertained.

The likes of Gary Hart, former goalkeeper Michel Kuipers, defender Kerry Mayo and ex-manager Mark McGhee, who had guided Brighton back up to the Championship in 2004 with victory in the play-off final at Cardiff’s Millennium Stadium, all gave their thoughts on Albion’s remarkable journey.

Hughton was then given a rousing ovation as he finally took to the stage.

The Brighton manager paid tribute to both the efforts of his squad and their fans, who are expected to face a battle to retain their hard-earned Premier League status.

“There are lots of reasons why it (promotion) can happen,” Hughton said.

“Certainly it has been about having the support of an owner and a board like we do have, the backroom staff that we do have, which is so important because it allowed me to do the job that I can.

“But, of course, mostly it is about a group of players who made a decision after last season that they wanted to challenge again.

Hughton, who has previous Premier League experience with Newcastle and Norwich, added: ” It is a wonderful opportunity for a group of supporters who have been outstanding to go to places where they have never been.

“We know next season is going to be tough, a lot tougher (than this season) and of course when those (tough) moments happen that is the time when we need you (fans) more than ever.

“You have been behind us all season, we look forward to a challenging season next season and giving you great opportunities.”

Brighton captain Bruno paid his own tribute to the fans. He said: “This is because of you.

“This club went through really tough times, and because of you we are where we are now.”

French midfielder Anthony Knockaert was named C hampionship Player of the Season, and sees no reason why the Seagulls should not be able to hold their own in the top flight.

“I just feel so happy, I have been struggling a bit because I have just come from (Las) Vegas!” he joked.

“It was the best season of my life, and I am not sure I can have one better – but I am probably going to because we will 100 per cent stay up next year.

“The team spirit here is amazing, it is something unbelievable and we are ready to go up.”

Before setting off, club chairman Tony Bloom joined a civic reception for the squad with the Mayor of Brighton & Hove, Pete West.

Bloom has overseen the club’s rebirth, which started with a move to their new permanent home at Falmer.

“It has been such an amazing journey, since we came to the Amex six years ago, our fans have been fantastic, the team has been brilliant and we have so deserved it,” the chairman said.

“L et’s not forget that 20 years ago we were homeless, had nowhere to go.

“We worked so hard, everyone associated with the club, and now we are in the Premier League. It is amazing.”