Two people have been airlifted to safety and several others rescued from their homes after flash flooding devastated a village in Cornwall.

Firefighters have advised residents to avoid the village of Coverack, which was hit by flash floods on Tuesday afternoon.

An elderly lady was reportedly rescued from a window when floods hit the village, while two people were rescued from their home by a helicopter crew.

Dramatic footage has emerged on social media of water sweeping through the village and water pouring over a wall and into the sea. 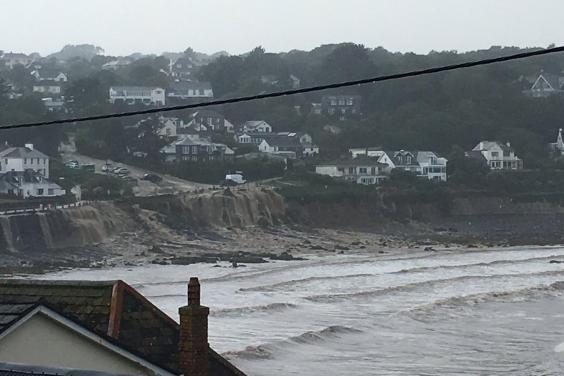 Water sweeps from the village over a sea wall and into the sea. (PA)

Two people were rescued by a coastguard helicopter, based in Newquay, a spokeswoman for the Maritime and Coastguard Agency confirmed.

“Six people were in a house and two have been rescued from the house by helicopter,” she said.

She said there were no injuries, but had no further details on the rescue.

The main road into the village is also believed to have been completely destroyed by the flooding.

The flooding began after a huge thunderstorm hit the south coast, with Plymouth and Devon also hit by torrential rain.

“There has been some heavy rainfall around,” said Met Office forecaster Craig Snell, who said the worst has moved north from the region. 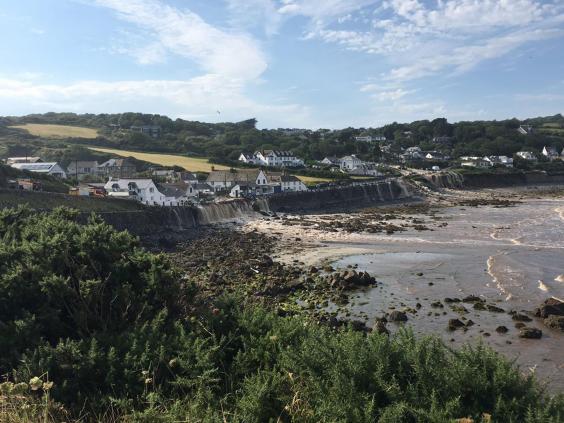 An eyewitness said the wet weather hit Coverack at about lunchtime, but got worse from around 3pm.

Ms Wainwright, who works in the village’s Paris Hotel, said hailstones the size of 50p pieces smashed small panes of glass on the building.

But she added: “It wasn’t until it cleared up at 4.30pm, and we could see over the other side of Coverack, and we could see the stream coming down the main road and going just straight off over the wall into the sea, that we realised how bad it had been and how much water and rain had come down.”

The wet weather is expected to spread across the coast this evening.

Numerous fire crews are at the scene.

Cornwall Fire and Rescue posted on Twitter: “Major flooding in Coverack area please avoid this area & do not attempt to drive through any flood water.”

The Environment Agency has issued alerts for possible flooding in south Wales and southern England.