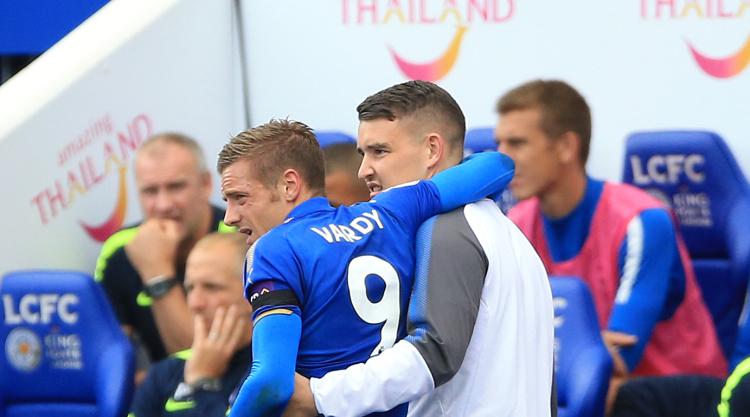 The England striker was forced off in added time of Saturday’s 2-0 win over Brighton at the King Power Stadium.

Vardy was limping an hour after the game and joins Kelechi Iheanacho (toe), Danny Drinkwater (thigh), Nampalys Mendy and Robert Huth (ankle) and Vicente Iborra (groin) on the treatment table.

Shakespeare takes his side to Sheffield United in the League Cup on Tuesday ahead of Saturday’s Premier League trip to Manchester United but believes Vardy’s issue is not serious.

“I have just left Ward 10 in there with a few receiving treatment,” said Shakespeare.

“Jamie obviously had a few tussles today and has an ankle heavily strapped with an ice pack on it.

“I will go and see how he is shortly but knowing Jamie he will be fine. He does have those battles but we wouldn’t change him, would we?”

Drinkwater is likely to rejoin training on Monday while Mendy and Huth have played for the Under-23s in the last two weeks although Iheanacho is still struggling with his toe problem.

Without them, Riyad Mahrez shone as he set up Shinji Okazaki’s opener – after Brighton goalkeeper Mat Ryan spilled his shot – just 52 seconds into the game before his second-half corner was nodded in by Harry Maguire.

Leicester have rejected three bids from Roma for Mahrez, the last being £32million, but Shakespeare has been impressed by his professionalism.

“He made the statement and everyone knows the speculation about the bid we had and it wasn’t accepted,” he said.

“I’ve spoken to him individually and said, ‘While you’re here you need to be professional and respectful of your team-mates and Leicester City Football Club’. Credit to him, he’s done that.”

Brighton failed to test Leicester, with Tomer Hemed’s second-half drive the only moment of worry for Kasper Schmeichel.

They have lost their opening two games in the Premier League and boss Chris Hughton admitted they need to learn fast.

He said: “We’ve got to keep possession better. If I look at the difference between the two teams, it shows their quality, their know-how and where they’ve been for the last few seasons.

“They’re not a side that really opened us up; they didn’t have great chances. But in the areas where they needed to keep possession, they were that little bit sharper and that’s what we need to learn.”