A smart bike hire company has been accused of littering London’s streets with abandoned cycles.

Hundreds of “dockless” yellow  pay-as-you-go oBikes appeared across the capital this week but some have already been vandalised.

A photo posted on Twitter shows a mangled oBike, with its front tyre ripped off, hanging from railings in the Isle of Dogs while another was thrown on tracks at Lewisham DLR station.

Cycling czar Will Norman said that “oBike showed up in London without consulting anybody”.

The Singapore-based firm is alleged  to have used Uber’s “disruptive” business model of swooping into a city and dealing with local regulations later. 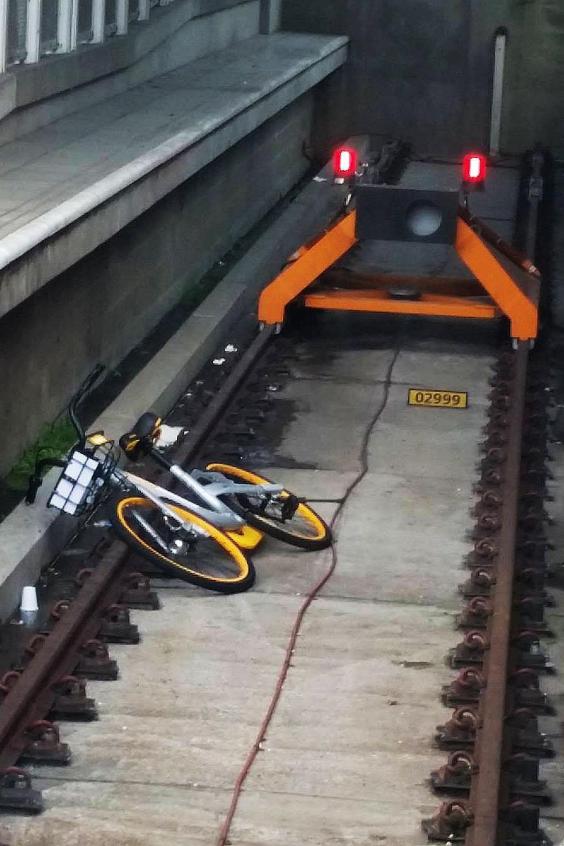 Mr Norman, the Greater London Authority’s walking and cycling commissioner, told City Hall’s transport committee: “We need the dockless bike hire companies to work with us and with the boroughs. We have got the powers to remove them (the bikes) if they are causing any dangers or obstructions.”

A partially sighted resident was said to have tripped over one left on a pavement in west London. The GPS-tracked bikes are unlocked by scanning a code on the bike via an app.

At the end of the hire they should be left in a “designated public bike-parking area” and locked using the app.  Supporters say the scheme could offer a cheaper alternative to Santander Cycles as it costs 50p for half an hour, plus a £49 deposit. Southwark, Tower Hamlets, Enfield and Hackney councils said they were not consulted before the scheme started. Tower Hamlets was talking to other boroughs and Transport for London to find a “common approach” to policing hire bikes.

After 400 were put on the streets of Hammersmith and Fulham, the borough said it could not get hold of the firm and resorted to tweeting it. Officials issued highway obstruction notices and the bikes were removed.

An oBike spokeswoman said: “oBike has listened to local councils and is committed to working closely with different boroughs and TfL to ensure we address the needs of all those involved. When a bike is reported vandalised we will work with police and authorities to identify those responsible. The original hirer is only penalised if identified as the perpetrator through this process.”