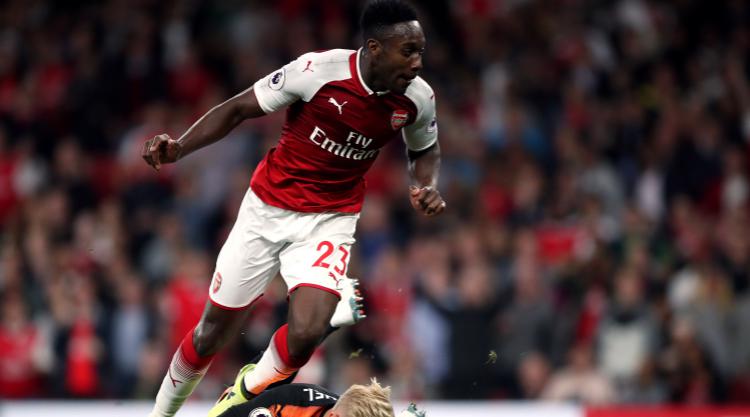 Danny Welbeck praised Arsenal’s togetherness as they came from behind to beat Leicester in their Premier League opener on Friday night – but wants results to come easier in future.

The Gunners eventually ran out 4-3 winners following an entertaining encounter at the Emirates Stadium.

Alexandre Lacazette marked his league debut for Arsenal with a goal on 94 seconds only for Shinji Okazaki to level less than three minutes later.

Jamie Vardy then struck twice either side of Welbeck’s equaliser as the Foxes looked set for a first league win over Arsenal since 1983.

But it was not to be as substitutes Aaron Ramsey and Olivier Giroud struck late on to seal a remarkable three points for Arsene Wenger’s side.

Heading into the game, Arsenal had won just one of their previous seven opening day fixtures but Welbeck was pleased with the spirit shown to turn this clash in their favour.

“Obviously for the neutral it would’ve been a great start, just watching it from the outside,” the former Manchester United striker said.

“For us it was a bit disappointing with the goals that we’ve let in and we shouldn’t really be conceding in that way, but I think we showed great determination and great togetherness to get back into the game and we won it towards the end of the game.

“Previously in the Premier League we’ve not got off to the best of starts, so it meant a lot for us to get a good start and get three points today. Obviously we can build on it from there.”

Arsenal shipped three goals but were without arguably three of their first-choice defenders as Per Mertesacker, Laurent Koscielny and Shkodran Mustafi all sat out due to a combination of fitness and suspension.

Once they are back and available, Welbeck is hopeful that future results can be earned in less trying circumstances.

“We wanted to do that today – unfortunately that didn’t happen and it’s something where we can look back and analyse the game and see where we went wrong and improve on the situation.”

Leicester showed plenty of endeavour as they came close to causing an upset in the Premier League’s first fixture.

Craig Shakespeare’s side boasted many of the players, and characteristics, that saw them shock the world to win the title in 2015/16.

One new recruit, defender Harry Maguire, felt Leicester gave the hosts a run for their money and – despite heading back to the east midlands with nothing to show for it – believes the display will hold them in good stead.

“It was a great game for the fans to watch but it is disappointing for ourselves,” he told LCFC TV. “To come away to the Emirates, score three goals but concede four is disappointing especially as a defender.

“We have to take the positives out of the game, we have gone toe-to-toe with Arsenal over 90 minutes and I don’t think many teams will come here and do that.

“We have got a tough first run but we now can take a lot of confidence from this game, knowing we can go to the big teams and put on a performance and hopefully in the coming games we get that bit of luck and turn the positive performance into good points.”