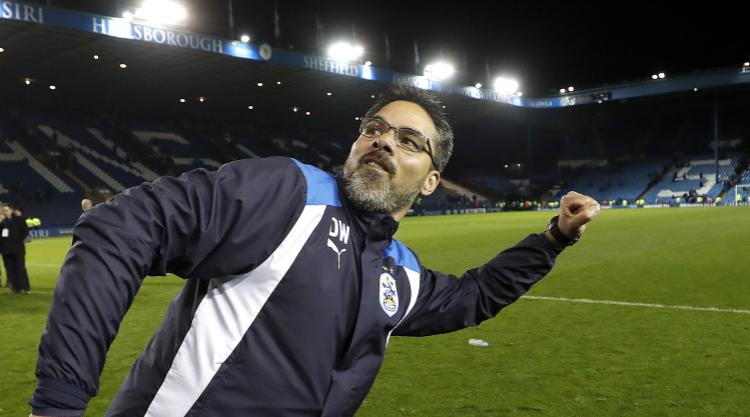 David Wagner led his victorious Huddersfield players off on a sunshine break insisting he is undaunted by the prospect of heading to Wembley with the richest prize in football at stake.

The Terriers kept their nerve in a thrilling penalty shoot-out win over Sheffield Wednesday at Hillsborough on Wednesday to book a place in the Sky Bet Championship final against Reading.

And before his side seek to book a scarcely believable place in the Premier League on May 29, which would be worth up to Â£200million, Wagner revealed they would fly out to Portugal for some rest and recuperation.

Wagner said: “We will go to Portugal for a few days with the families and the children and we will prepare there before we come back for the usual training week.

“I think it makes sense because the gap is too long to keep the excitement high, so (it is important) to do something at the beginning of this long period.”

Wagner believes his players are built to perform on the biggest occasion after they once again showed their spirit to hit back from a goal down and take the Owls to a dramatic spot-kick finale.

In hauling them from their status as relegation candidates at the start of the current campaign, the German believes they have accrued the kind of experience which will help them pitch up at Wembley unperturbed by the pressure.

Wagner added: “I’m not worried about the occasion after what we’ve done this season and the experience they’ve shown.

“The biggest quality of the group is their character – they are always able to bounce back and they really trust and believe in what they are doing and are able to make themselves independent of what is around them.

“This is a high quality to be focused on themselves and this is why I’m not worried about Wembley – they will take the excitement. They will be nervous of course but they will have an idea and they will follow it up.

Huddersfield will write one of the Championship’s most remarkable chapters if they go on to earn a place in the top flight – and they will also become the first club to go up to the Premier League having finished with a negative goal difference.

And the positives keep coming for Wagner, who saw striker Collin Quaner make a game-changing impact when he replaced Elias Kachunga 18 minutes from the end of normal time.

The German, derided in some quarters for his lack of influence since making a goalscoring debut at Rochdale in the FA Cup in January, set up Town’s equaliser which was turned into the net by Owls defender Tom Lees, and was instrumental in his side finishing the tie on top.

His performance, in place of the relatively ineffective Kachunga, will give Wagner plenty to think about as he finalises the starting line-up he hopes can lift the Terriers back to the top flight for the first time since 1972.

Wagner added: “I think he (Quaner) made a massive influence – he was very strong and active, he has been in very good form and it was the right decision for me to bring him from the bench.

“He did exactly what I expected. Even if he could only show it for extra-time he has been in very good form for the last six to eight weeks and he was able to show me that once again.”