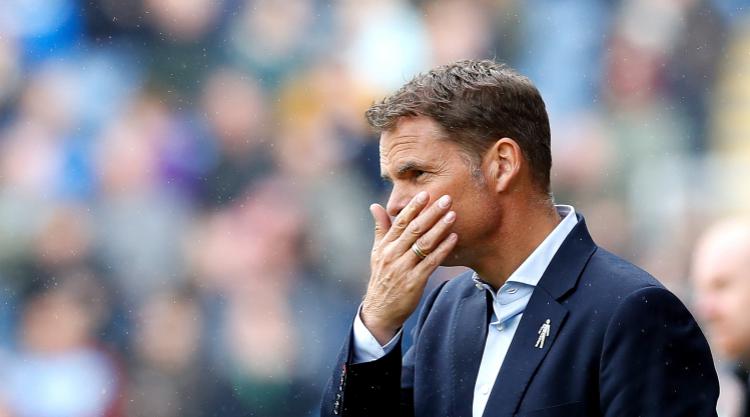 Burnley new boy Chris Wood pounced on a dreadful back-pass by the South Korean to put his side in front with less than three minutes on the clock and the hosts held out to leave De Boer’s reign hanging by a thread after a 1-0 loss.

Palace perhaps deserved something from a hugely-improved performance – and almost got it when Scott Dann somehow contrived to head wide from point-blank range in injury time – but it may not be enough to save the Dutchman his job.

De Boer had made three changes and reluctantly switched to a 4-4-2 formation in a bid to kick-start his season, but looked on aghast as Lee’s horrendous early error piled more pressure on his beleaguered side.

In no danger wide on the left flank, Lee, making his 100th Premier League appearance, turned and played the ball back in the direction of goalkeeper Wayne Hennessey, oblivious to the lurking threat of the in-form Wood.

Served up with the simplest of chances, the New Zealander reacted clinically by firing past Hennessey first time from the edge of the box, giving his side a dream start.

To their credit the visitors refused to buckle and were almost level within a minute when Dann took aim from the right side of the box and his deflected shot was booted off the line by Matthew Lowton.

Palace continued to press well, offering a glimpse of what might have been but for Lee’s early error, but clear chances were few and far between with the home defence coping admirably with what the Eagles could throw at them.

Burnley suffered a setback just past the half-hour mark when Heaton was forced off with a shoulder injury after landing awkwardly, ensuring a Premier League debut for 25-year-old Nick Pope.

However Palace failed to pressure the new boy whose only act in low-key ending to the first period was a good low save to deny Townsend.

The second half began in much the same vein, with Palace pressing to little effect, their best early opportunity falling to captain Jason Puncheon who drilled a half-chance wide.

Palace had two chances in the 71st minute, substitute Levi Lumeka just beaten to a Townsend cross by Lowton, then Jeffrey Schlupp blazing a fine chance for his side over the bar from the middle of the box.

But the home side came even closer two minutes later, when substitute Ashley Barnes drifted in from the right flank and unleashed a low, curling effort which was superbly kept out by a diving Hennessey.

Benteke was denied by the advancing Pope in the 78th minute then Dann served up his desperate miss to ensure another dismal top-flight afternoon for De Boer and Palace.