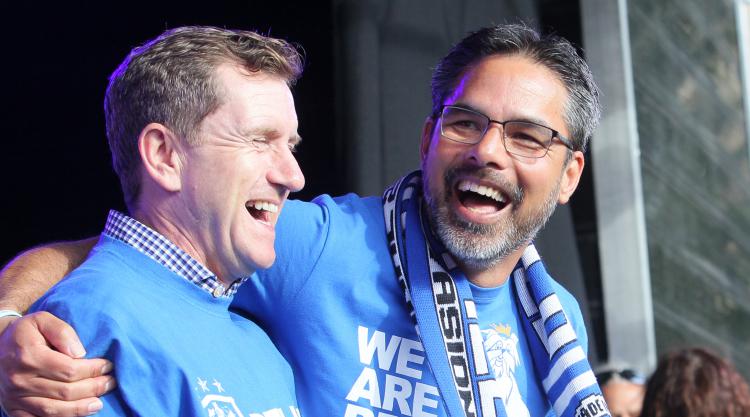 The Terriers were given a rousing civic reception in front of the town hall on Tuesday night as thousands of heady fans gathered to celebrate Monday’s Sky Bet Championship play-off final win against Reading.

Town centre roads were closed hours in advance of the open-top bus parade as supporters lined the streets to salute their heroes, with an estimated 17,000 packed into St George’s Square and Hoyle said he was in “dreamland”.

“Unbelievable,” Hoyle told Press Association Sport as he surveyed the party scenes after players, coaches and staff had been presented to a raucous crowd.

Hoyle said he would be meeting head coach David Wagner at his house to discuss the way ahead over morning coffee.

When asked what was at the top of their to-do list, Hoyle said: “How we’re going to survive in the Premier League.

“Our list will contain everything. But what we’ve got to remember is how we’ve got here.

“Other clubs will look at us and think, ‘Wow! Look what they’ve achieved’. So how we got here will remain for how we go forward.”

Huddersfield were six weeks away from liquidation when they went into administration in March 2003 and were relegated to the bottom tier two months later.

Play-off final wins – all via penalty shootouts – in each division have followed since, with Hoyle at the helm for the last two.

He took control of Town nine years ago when they were in League One and Monday’s 4-3 win on penalties at Wembley after a goalless 120 minutes sees the Terriers become the 49th different club to reach the Premier League.

“We never thought it would happen,” Hoyle said. “Since we bought the club in 2008 it’s got harder and harder each year.

“We’ve had a bit of luck and we’ve had an exceptional coach. He created an identity and we stuck to it and we’re going forward.

“We’ve reached the dreamland, the promised land and little Huddersfield, the little dog, is now a big dog and we’re there. Happy days!”

When asked if Huddersfield would survive in the Premier League, Hoyle added: “I’d like to think so, but it’s a really tough division. You hope so, let’s see how it goes.”

Wagner, a surprise appointment to succeed Chris Powell as head coach in November 2015, could not contain his delight.

The German has guided Town to the top flight in his first full season and joyous fans lapped it up as he stole the microphone off club compere Paul Ramsden to lead the chorus of club songs.

Wagner said he would try and remember what his priorities were in time for his meeting with the chairman.

“I made my thoughts about four weeks ago before the play-offs started and now I’ll have to get the thoughts I had back in my head,” he said.

“We’ll have a meeting and we’ll find some solutions and create some good ideas as well.”

Wagner must quickly ascertain which of his loan players will be staying at the club, with the likes of Aaron Mooy, Izzy Brown and Kasey Palmer all scheduled to return to their respective parent clubs.

“I’ve never really got my head around it because my whole focus was on the play-offs, first Sheffield (Wednesday) and then Reading,” he added.

“But of course they helped us achieve what we achieved and made a big impact and they’re very interesting players – but not only for our club.

“So hopefully if we’re able and strong enough to keep them, we will do.”

Wagner admitted to being taken aback by the scenes at the town hall, adding: “This is something else. I wasn’t expecting this.

“Brooky (Andy Brook) our kit man said when we left the training ground on the bus that we would see something exceptional today and he was right.”