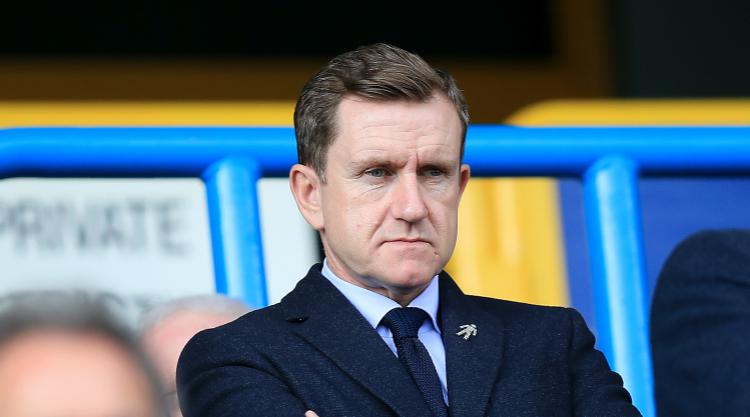 Huddersfield owner and chairman Dean Hoyle has dared to dream all his life and stands on the threshold of realising another by leading his beloved club to the Premier League.

The Terriers are one game away from a return to the top flight of English football for the first time in 45 years after a nerve-jangling penalty shootout win against Sheffield Wednesday at Hillsborough on Wednesday night.

Hoyle, 50, has spent his life defying the odds and victory over Reading in the Sky Bet Championship play-off final at Wembley on May 29 would mark the end of another chapter in a remarkable rags to riches story.

Born in Heckmondwike, West Yorkshire, Hoyle was raised by a single mother and soon displayed an aptitude for thinking outside the box as he could quite easily have chosen Leeds as his boyhood club.

Leeds, under manager Don Revie, were emerging as one of Europe’s footballing powerhouses and Heckmondwike was more or less equidistant from Elland Road and Town’s old stadium at the time, Leeds Road.

“I could have turned right to Leeds or left to Huddersfield – and I don’t like walking uphill so it was Huddersfield for me,” Hoyle said in a recent interview.

In his first season attending games at Leeds Road, Mick Buxton’s Town stormed to the old Fourth Division title and Hoyle was hooked.

He was a relatively slow starter in life as his obsession with football, by his own admission, clouded his judgement at school and he left White Lee Secondary without any qualifications before becoming an apprentice engineer.

Hoyle continued to follow Town with a passion, but a newspaper advert took his life in a different direction.

“I saw a business for sale in The Yorkshire Post selling greeting cards out of the back of a van for £2,000,” he once said.

Hoyle co-founded Card Factory with his wife, Janet, and grew their business from the back of a van and then a market stall into a company delivering profits of £50million in just 12 years.

The Hoyles had established a greeting card store empire comprising of 500 outlets with more than 5,000 employees and in 2010 they sold the Card Factory for a reported £350million.

On the back of blood, sweat and tears, Hoyle and his wife had become one of Yorkshire’s wealthiest couples.

According to the latest Sunday Times Regional Rich List, the pair are ranked 12th, with a personal fortune of £284million.

Hoyle’s passion for Town continued. The club bade a sad farewell to Leeds Road in 1994 when they moved to their new stadium and he continued to share in fellow fans’ frustrations as they struggled to gain a foothold in the second tier.

His wealth allowed him to become actively involved in reviving the Terriers’ fortunes and towards the end of the 2007/8 season – Town finished 10th in League One – Hoyle joined the board of directors.

He approached his new role with the same mindset that had seen him become one of the country’s leading entrepreneurs. It was all or nothing, a calculated risk and he was soon running the club.

In June 2009 Hoyle became the club’s majority shareholder and replaced Ken Davy as chairman and so began another journey that could soon take him to the Premier League.

Hoyle, who now owns 100 per cent of the club’s shares, refused to throw his wealth at the club, instead working towards them becoming self-sustainable.

To achieve top-flight football was his driving force, but he realised the importance of the fans and the wider community and put in place the initiatives to keep them at the club’s heart.

Simon Grayson replaced Lee Clark as manager in February 2012 and Town won promotion to the Championship via a penalty shootout, but Hoyle still refused to bankroll the club in order for them to make the next big step.

Huddersfield struggled to make in-roads in the second tier and after spells under Grayson, Mark Robins and Chris Powell, Hoyle went left field in his decision to entrust the team’s fortunes with little known David Wagner.

Hoyle had grown fed up of the managerial merry-go-round and started afresh by appointing former Borussia Dortmund coach Wagner in November 2015.

“It’s risk versus reward,” Hoyle said in February as Wagner guided Town into contention for an unlikely automatic promotion.

“In life, in business and in football you have to take risks. It was a calculated risk.”

Hoyle has proved good at this. One game to go and for Town fans it could prove to be his best call yet.