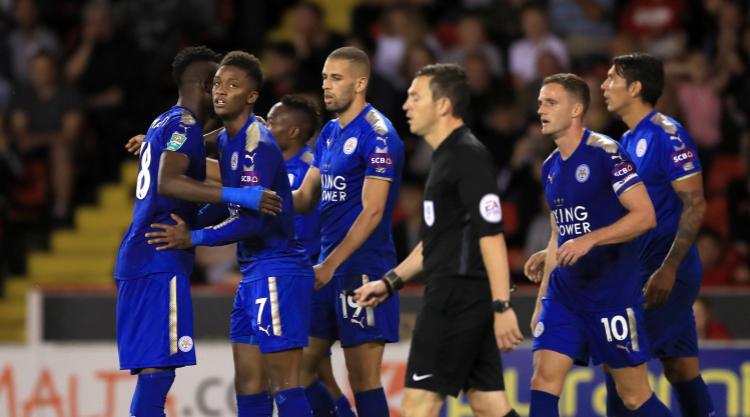 Leicester boss Craig Shakespeare admits Demarai Gray and Islam Slimani have given him “food for thought” ahead of Saturday’s Premier League meeting with Manchester United.

Gray, yet to start in the league this season, has been linked to Bournemouth but reminded Shakespeare of his ability with a classy opening goal in the 4-1 Carabao Cup victory at Sheffield United.

Slimani is reportedly interesting former club Sporting Lisbon, as well as Watford, and like Gray demonstrated his value to the Foxes with a well-taken second-half brace at Bramall Lane.

Leicester are keen to build on their 2-0 weekend win against Brighton and will travel to Old Trafford in high spirits, even if Shakespeare does have a selection headache.

On England Under-21 winger Gray, he said: “He’s given me food for thought.

“The idea before the game was to give the squad players the game time they needed and they answered in the right way.”

Slimani, the in-demand Algeria striker, will come into consideration, too.

Shakespeare said: “Centre-forwards will be judged on goals and their team ethic – he’s done his chances no harm.

“At the moment there is speculation about a lot of players but until we get an offer that’s accepted, we carry on as normal.”

United manager Chris Wilder knew the game was gone when Slimani made it 3-0, even if Caolan Lavery did notch an equaliser before Ahmed Musa reasserted Leicester’s dominance.

Such was the strength of the 2016 Premier League champions’ grip on proceedings in the final stages, Shakespeare left star men Jamie Vardy and Riyad Mahrez on the bench.

A relieved Wilder said: “I daren’t look at the bench. I didn’t look for 90 minutes just in case I annoyed Vardy or Mahrez and they wanted to come on and take the game away from us.”

The late rally that led to Lavery’s consolation did little to soothe Wilder.

He said: “I’m not going to pat my players on the back for going to the end and giving everything because they know I demand that.

“I believe we’re a decent footballing side, I don’t want us to just smack it. We create good openings, but they’ve got to learn that the key is in the quality in that position.”