Donald Trump and Emanuel Macron engaged in another incredibly long handshake as the pair met for Bastille Day in Paris.

The two leaders held their handshake for at least 25 seconds at the parade, which marks 100 years since the Americans entered World War One.

Mr Trump even managed to greet Mr Macron’s wife with a kiss without letting go of the French leader’s hand during the extended shake.

The bizarrely long encounter is the latest incident in what has been dubbed “the battle of the Alphas” between the world leaders. 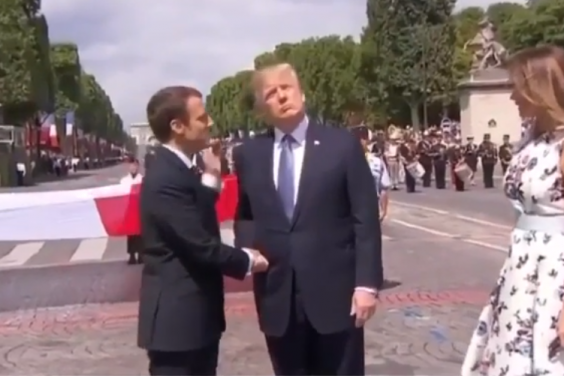 President Macron, his wife Brigitte, Mr Trump and First Lady Melania Trump walked together on the Place de la Concorde at the end of military parade the military parade.

The handshake came after the US and French Presidents and had a hard time letting go of each other when they shook hands at their first meeting in Brussels in May.

Mr Trump was the guest of honour for the celebration, and the two men sat side-by-side as American and French warplanes roared above the Champs-Elysees. 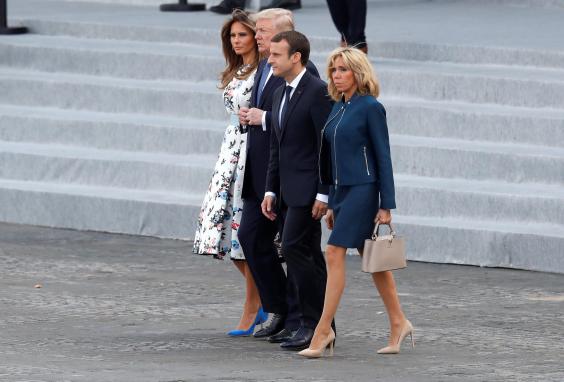 The parade coupled traditional displays of military power with a look at wars, past and present.

Mr Macron, in a speech near the end of the event, thanked the US for intervening in the First World War.

He said the fact the US leader was at his side “is the sign of a friendship across the ages.

“And that is why I wish to thank them, thank the United States for the choice it made 100 years ago.”

He said the US and France are firm friends and “this is why nothing will ever separate us.”