Donald Trump has appeared to support rougher treatment of suspected criminals, as he told officers not to be “too nice”.

The US President was speaking to a room full of police in New York on Friday when he spoke dismissively of arresting officers who use their hands to protect suspects’ heads when putting them in police cars.

Mr Trump said: “When you see thugs being thrown into the back of a paddy wagon, you just see them thrown in; rough.

“Like when you guys put somebody in the car and you’re protecting their head, you know, the way you put your hand over it. 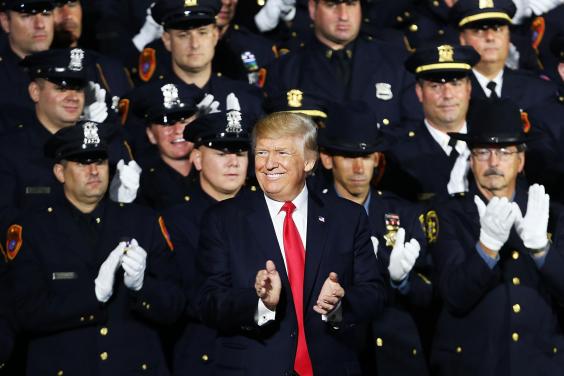 President Donald Trump was there to talk about combating violent gangs. (Getty Images)

“Like, don’t hit their head, and they’ve just killed somebody. I said, you can take the hand away, OK?”

Some of his comments drew cheers from the audience.

President Trump also claimed laws are written to “protect the criminal” and “not the officers”.

He told the room of law enforcement officers that “laws are stacked against you” and need to be changed.

The US leader was speaking at an event to discuss efforts to tackle a violent gang called MS-13.