Donald Trump claimed he has “complete power” to issue pardons amid reports he has enquired whether he could pardon himself over Russia allegations.

In a flurry of tweets, President Trump ranted about pardons, “fake news” and former presidential rival Hillary Clinton, among other topics.

Mr Trump wrote in one of his 10 messages: “While all agree the U. S. President has the complete power to pardon, why think of that when only crime so far is LEAKS against us. FAKE NEWS.”

The Washington Post reported that Mr Trump has inquired about his authority to pardon aides, relatives or even himself in connection with the widening investigation into Russian interference in the election and whether any Trump associates were involved.

One of Mr Trump’s lawyers, Jay Sekulow, said the president has not discussed the issue of pardons with his outside legal team.

Speaking to reporters at the site of the Western Conservative Summit in Denver, he said that Mr Trump’s private legal team is “not researching it because it’s not an issue”.

Mr Sekulow said: “I don’t know where this came from. There is nothing to pardon,” adding that “what’s going on in Washington is an attack on the president”. 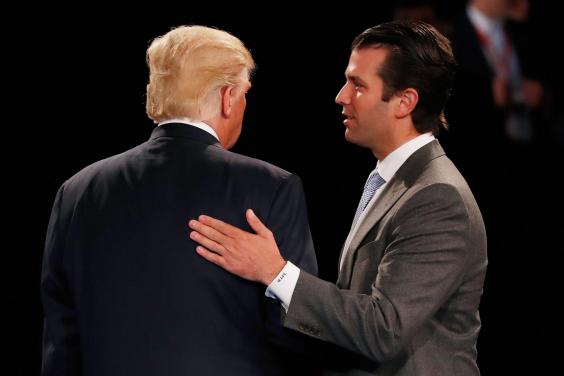 He tweeted that people are asking why what he calls “crimes” by election opponent Hillary Clinton and former FBI director James Comey are not being investigated.

Mr Trump defended his son in one of the tweets, saying he “openly gave his e-mails to the media & authorities whereas Crooked Hillary Clinton deleted (& acid washed) her 33,000 e-mails!”

Donald Jr has become a focus of the investigation after it was revealed that he, Mr Kushner and Mr Manafort met Russian representatives at Trump Tower in June 2016.

Mr Trump Jr later released email exchanges concerning the meeting on Twitter, after learning that The New York Times was about to publish them.