Donald Trump’s son has released an email chain revealing he agreed to meet a Russian official who claimed to have information that would incriminate Presidential rival Hillary Clinton.

Donald Trump Jr posted the emails on Twitter, which appear to show he agreed to meet Natalia Veselnitskaya in anticipation of receiving sensitive material.

The emails were between Mr Trump Jr and publicist Rob Goldstone – who helped to arrange the meeting on June 9, 2016.

“The Crown prosecutor of Russia … offered to provide the Trump campaign with some official documents and information that would incriminate Hillary and her dealings with Russia and would be very useful to your father,” said the June 3, 2016, email to Trump Jr. from publicist Rob Goldstone.

It goes on: “This is obviously very high level and sensitive information but is part of Russia and its government’s support for Mr. Trump.”

Mr Trump Jr replied: “If it’s what you say I love it especially later in the summer.” 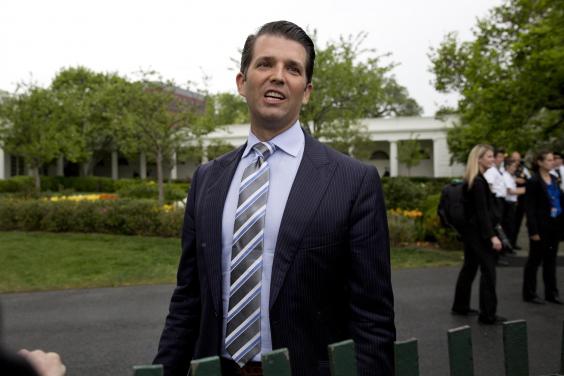 Communications: Trump Jr said he released the emails to be ‘transparent’ (AP)

The disclosures in the email chain could provide ammunition for U.S. investigators probing whether there was collusion between the Kremlin and Trump’s Republican presidential campaign.

The exchange includes at least one error in that Russia, which ceased to be a monarchy with the Russian Revolution, has a prosecutor general rather than a “crown prosecutor.”

Moscow has denied any interference, and Trump says his campaign did not collude with Russia.

And Natalia Veselnitskaya says she is a private lawyer and denies having Kremlin ties.

In response to the revelations, President Donald Trump described his eldest son as “a high-quality person,” and applauded “his transparency.”