Donald Trump has launched a “real news” program on his Facebook page, hosted by his daughter-in-law and recapping his achievements for the week.

Amid swirling turmoil at the White House as high-profile personnel changes grabbed headlines, Mr Trump sought to draw attention to his better side.

The first episode of the two-minute “news” show, posted to his page on Sunday, features his son Eric’s pregnant wife Lara recapping the president’s “wins” for the week.

“I bet you haven’t heard about all the accomplishments the president had this week because there’s so much fake news out there,” she kicks off.

In a largely uncritical take on the previous seven days, Mrs Trump starts by announcing that the president has donated this quarter’s salary to the Department of Education, having given it to the Parks Department in the previous quarter.

She then points out that unemployment is at its lowest rate since 2001, although she does not mention that it has been falling every month for just over six years.

She tells viewers that Mr Trump has created 800,000 during his just over six months in office and recounts the president’s visits to “incredible veterans”, a hospital treating wounded soldiers, and officials from the Department of Immigration and Customs Enforcement to “crack down” on gangs.

She signs off: “Thanks for joining us everybody, I’m Lara Trump and that is the real news.” 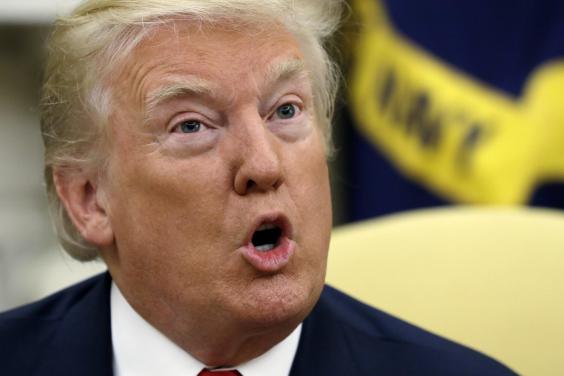 Donald Trump claims to be the victim of ‘fake news’ (AP)

The clip makes no mention of high-level drama at the White House that saw communications chief Anthony Scaramucci removed this week after just ten days in the role.

The firing followed an extraordinary week in which Reince Priebus was ousted as chief of staff after Mr Scaramucci launched a foul-mouthed tirade in a New Yorker interview calling him a “f***ing paranoid schizophrenic”.

Mr Trump has repeatedly asserted that media reports critical of him are “fake news”, and wrote on his Facebook on Tuesday: “Only the Fake News Media and Trump enemies want me to stop using Social Media (110 million people). Only way for me to get the truth out!”