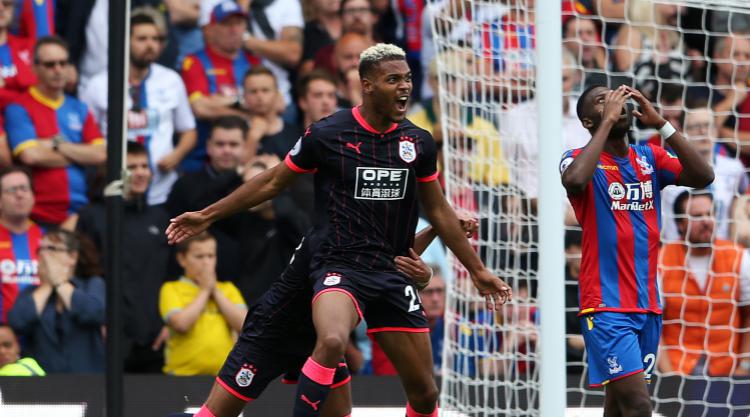 Huddersfield made a dream start to their first ever Premier League season with a convincing 3-0 victory over Crystal Palace at Selhurst Park.

Widely dismissed as contenders for relegation before they had even kicked a ball, they produced a typically-energetic display to outclass their experienced hosts, earn three vital points and climb to first place.

Their season may yet descend into a battle for survival, but after Joel Ward’s own goal, two fine finishes from club-record signing Steve Mounie gave David Wagner and his team significant reason to believe they may yet be capable of more.

Palace fans started the season with renewed optimism amid Frank de Boer’s appointment as manager, but in his first competitive game they showed little to suggest they will have another struggle.

After an unremarkable opening period, it was the visitors who first began to threaten. From Aaron Mooy’s 23rd-minute corner, Christopher Schindler flicked on possession towards Mathias Jorgensen, whose unconvincing cross was then poorly turned in by Ward beyond Wayne Hennessey to give Huddersfield the lead.

The hosts’ confidence suffered, and it took only a further three minutes for them to concede a second.

With time and space on the left wing, Mooy sent an accurate cross into Palace’s area from where Mounie was left unchallenged to routinely head his first goal for the club.

If Palace were providing the latest demonstration of poor defending already regularly seen in the opening weekend of the new Premier League season, they were also showing why they struggled against relegation during the last.

De Boer has adopted a more expansive 3-4-3 formation after abandoning the pragmatism instilled by his predecessor Sam Allardyce, and already that decision was appearing to come at a cost.

Alan Pardew had been sacked before Allardyce’s appointment when his pursuit of what he called “street football” had led to increasingly poor results, but De Boer has spoken with confidence of his plans for his new team.

Only an exceptional last-gasp, sliding tackle from Ward prevented Tom Ince from putting Huddersfield 3-0 up after the forward was through one-on-one with Hennessey, while Palace provided little in response before half-time.

In a positive change De Boer took advantage of the break to sacrifice Luka Milivojevic for Andros Townsend, but so flat had his team been that at 2-0 down that far from represented a risk.

The substitute combined well with debutant Ruben Loftus-Cheek to create space to send a low cross towards Christian Benteke that remained just beyond the striker’s reach when he had only needed to tap in.

A well-timed through-ball from Ince sent Mounie on goal against Hennessey, but when the striker hesitated, similarly to Ward, another of Palace’s debutants Timothy Fosu-Mensah stretched to dispossess him.

When Scott Dann wasted another chance by shooting over the crossbar, even a draw appeared beyond Palace, but there was still time for the 22-year-old Mounie to score his team’s third.

In the 79th minute, substitute Collin Quaner broke and squared to the striker on the edge of the area, from where he classily finished inside the right post to further reward a fine debut display.