This is the moment an RNLI lifeboat was launched to rescue a man who had drifted a mile out to sea in a toy dinghy.

The alarm was raised at 7.30pm on Monday after he was spotted near a wind farm off the coast of Redcar, north-east England.

Dramatic video footage showed the lifeboat racing to rescue the man, who had attempted to paddle back to shore but was taken further out by the currents.

Dave Cocks, from Redcar RNLI, said the man was wearing just a hoodie and shorts when he was rescued near Teesside Wind Farm. 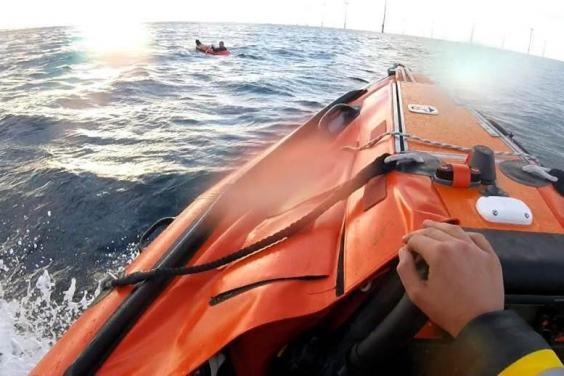 Rescue: The RNLI lifeboat saved a man who floated out to see in a toy dinghy (RNLI)

He said: “If the alarm hadn’t been raised there was every likelihood he’d have drifted out of sight of land and we could well have been bringing a dead body back.”

The man was given safety advice after being taken back to the beach.