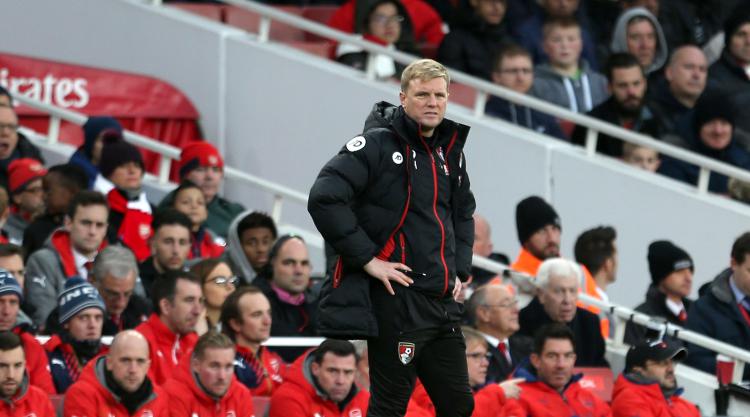 Bournemouth boss Eddie Howe will not underestimate the “huge quality” of Arsenal as his side look to heap more pressure on the Gunners with a first Premier League win.

The Cherries head to the Emirates Stadium on Saturday having lost all three of their league matches so far, including a 2-1 home defeat by Manchester City before the international break.

After winning their opening match with a thrilling 4-3 victory over Leicester on a Friday night, Arsenal have since been beaten at Stoke and then humiliated 4-0 at Liverpool to leave manager Arsene Wenger once again facing questions over the direction of the team and his continued leadership.

Despite all of the rumblings of discontent within the Gunners’ camp, Howe knows just what damage a fully-focused Arsenal side can inflict.

“There’s not just one player that you have to look out for, when you play a team like Arsenal it’s a collective with huge quality in all positions,” Howe said at a press conference.

” Our focus has to be on our collective and how we can stop their team functioning while obviously causing them a threat the other way going forwards.

“I have huge respect for them as a football club, but hopefully this one will swing our way.”

Howe rejected the suggestion Bournemouth would benefit from tackling Arsenal when they were on a low.

“I don’t think you can predict good times and bad times to play teams, our only focus is on our preparations,” he said.

“Our training has been very good and I just hope we continue our momentum from the Manchester City game.

“You need to start the game well and stay in the game, it doesn’t matter what run of form you’re in – you can’t give yourself too much to do.”

As well as recruiting Jermain Defoe, Nathan Ake and veteran goalkeeper Asmir Begovic, Howe feels securing new long-term deals for the likes of Charlie Daniels and Tyrone Mings shows Bournemouth are looking to develop a quality collective of their own.

“It’s always good from our perspective to see players commit themselves to the future of the football club. The cost of signing players is so extreme nowadays that you have to keep and protect the players you have,” the Bournemouth manager said.

Captain Simon Francis should be back in contention following a hamstring problem which has kept the defender out since the first game of the season.