Eight bodies have been pulled from the rubble of a block of flats that collapsed near Naples, fire crews say.

The dead have been named as an elderly resident and two families, one with children of school age, and one with a grown son living at home.

Firefighters and volunteers desperately searched through debris overnight after the five-storey building collapsed on Friday.

The eighth and final body was found early on Saturday morning, more than 24 hours after the collapse.

About 80 firefighters worked through the night with diggers, drills and by hand to locate the victims. 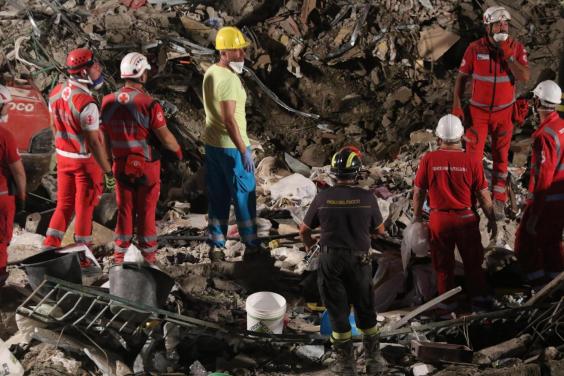 The cause remains under investigation but authorities say it may be linked to renovation work on the building.

It is located along the Naples-Salerno railway line in the seaside town of Torre Annunziata.

Witnesses said there was no explosion before the collapse but a train had just passed.

The Italian railway said in a statement that the vibrations from passing trains have no impact on the stability of adjacent buildings.