London was hit by a lightning storm of epic proportions last night, and forecasters say there could be more on the way.

A second wave of thunderstorms is predicted to arrive, with forecasters warning of potential flooding.

The capital was hit by spectacular lightning and torrential downpours throughout Tuesday night as the first of the storms arrived.

Dramatic pictures showed bolts of lightning in the cloudy night sky above London and across the south of England.

The Met Office has now issued a yellow weather warning for Wednesday with the chance of more “severe” storms breaking out in the afternoon. 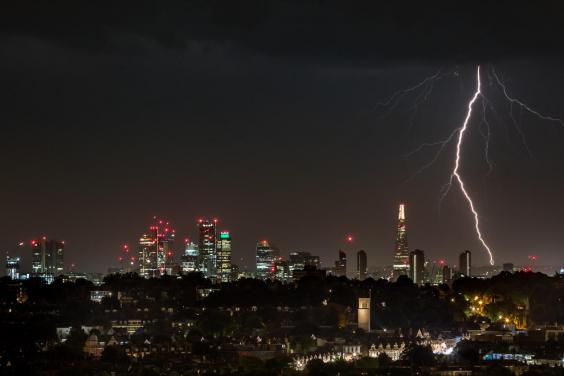 They have also warned that some areas may see flooding, which could potentially disrupt transport routes for hundreds of thousands of commuters.

The warning states: “Although some places will miss the thunderstorms, there is a chance of localised sudden flooding of homes, businesses and roads.

“Frequent lightning and large hail may be additional hazards, the latter bringing potential for disruption to power networks.”

It is still set to be a hot day in the capital, with maximum temperatures of around 27C. But the Met Office has forecasted the capital could also see over 30mm rain in an hour, and perhaps more than 50mm in two or three hours.

Trains and buses were generally running good services on Wednesday morning, while flights in and out of Heathrow and Gatwick were unaffected.

Many people captured photos and videos of the remarkable lightning overnight across the south of England, particularly in the coastal areas.

The intense conditions caused flash flooding in a coastal village in Cornwall, with some 50 properties affected and several people having to be rescued from their homes.

A council spokesman confirmed some properties in Coverack and one of the roads suffered structural damage and are due to be inspected by structural engineers.

Two people were rescued by a coastguard helicopter, and one witness described the flooding as “quite horrendous”.

The force tweeted: “We are experiencing problems with the 101 lines due to the weather, 999 lines are ok you can also contact us via the website if you need us.”

Water had to be pumped out of a number of properties in Tunbridge Wells, the fire service said, after it received more than 60 calls to the 999 line within one hour.

Crews from Kent Fire and Rescue Service attended but, despite two of the calls stating that people were trapped inside properties, no rescues were needed.

Have you got pictures or video of the storm? Send them to our news desk at news@standard.co.uk