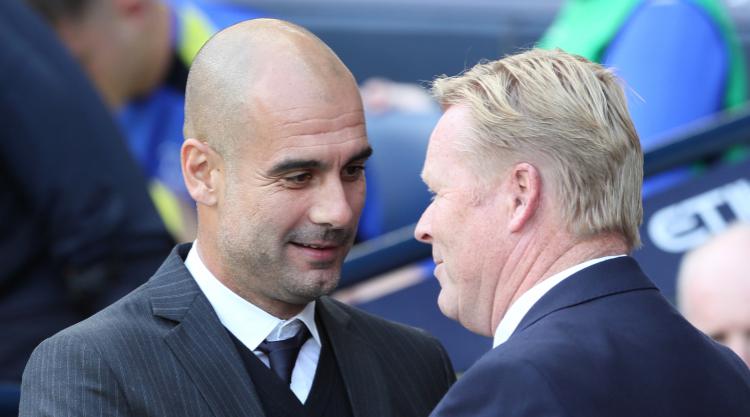 Ronald Koeman rates Manchester City as a better team than last season – but still believes they have a weakness that Everton can exploit.

The Toffees achieved one of the most notable results of last term when they defeated City 4-0 at Goodison Park having held Pep Guardiola’s side to a 1-1 draw at the Etihad Stadium earlier in the campaign.

Koeman and Guardiola know each other well from their Barcelona days, and the Dutchman is a big fan of his friend’s style of play.

But he also feels it gives hope to Premier League opponents, saying: “The way he likes to play is the most difficult way. It’s really a pleasure to see his teams playing football.

“They play with a lot of offensive players in the teams. The Premier League is strong physically on set-plays and they try to play with a high defence.

“There is always space behind, we know that, we remember that. When we played City at home we punished them for that but I still think the business they did in the summer, they are stronger than last year.”

Both teams have been busy in the transfer window and Everton’s latest recruit, record signing Gylfi Sigurdsson, is set to make his debut, probably off the bench.

City have been installed as title favourites, but Koeman is wary of reading too much into early results.

Guardiola won his first 10 games as City manager last season but his side eventually finished third, 15 points behind champions Chelsea.

“When we played Man City last season, I mentioned that we were really lucky to get one point out of that game, and on that day, they played fantastic football, and I said that they would be the big favourite to win the league,” recalled Koeman.

“After that they started to struggle. That’s football. You never know. It’s difficult to have predictions about who’s the strongest.

“After what I saw from different teams, I was impressed by (Manchester) United. I’m impressed by City. But maybe in two weeks or two months, it can be different. But of course they are strong.”

City began their campaign with a 2-0 win over Brighton, while Everton beat Stoke 1-0 and have also won three Europa League qualifiers.

The Toffees are yet to concede a goal, with new £25million goalkeeper Jordan Pickford settling in quickly.

Koeman knows City will be a big test of his team’s whole backline, saying: ” If we get a clean sheet, I don’t know if it will be a miracle. Maybe yes. We are strong defensively but the key to get a good result is also what we are doing when we have the ball.”

Monday’s match, meanwhile, will be a first return to Manchester for Wayne Rooney since he left Old Trafford to rejoin his boyhood club.

But Koeman does not expect the occasion to have extra significance.

“It’s not the first time that he will play against City in that stadium,” said the Everton boss.

“He knows maybe the reception (he will get) but he’s such an experienced player that he will not sleep more difficult than he will sleep normally. Players like that platform to play football.”