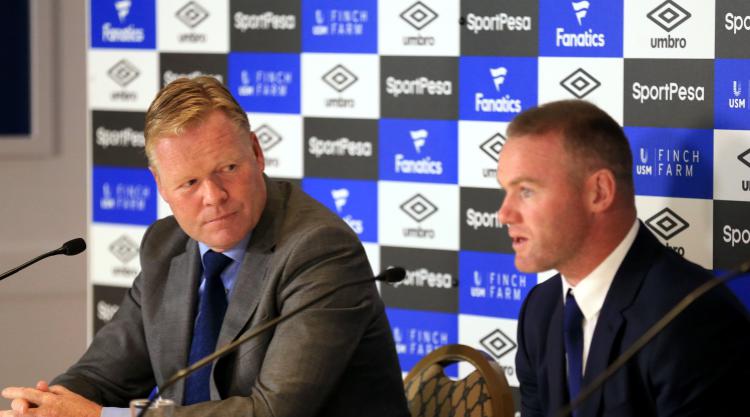 Ronald Koeman feels an Everton spending spree that has included the acquisition of serial title winner Wayne Rooney has signalled their intent to gatecrash the Premier League’s top six.

The likes of Jordan Pickford, Davy Klaassen, Michael Keane and Sandro Ramirez had already been brought to Merseyside for a combined total of nearly £100million when Rooney, both Manchester United and England’s all-time record scorer, completed his romantic return to his boyhood club at the weekend.

Their arrivals are a declaration of majority shareholder Farhad Moshiri’s bid to upset the top-flight’s established order and while Koeman was unwilling to make any top-four declarations at Rooney’s introductory press conference, he does believe Chelsea, Tottenham, Manchester City, Liverpool, Arsenal and Manchester United will all have taken notice of the headline-grabbing moves made at Goodison Park.

“It is still too soon to talk about top four; what we’d like to do is continue what we did last season,” Koeman said.

“Everyone is trying to get the best players. The big six in the Premier League will spend money as well but it is a good signal to everybody that we are on board and will try to give them that competition that we didn’t last season.

“Everybody knows you cannot do that in one season. The first season (the aim) was to try to play good football and get good results but now we need to make the next step to get the type of players in who can use that pressure and the qualities we need to improve.

“Everybody knows that there was one really big reason for me to sign one year ago for Everton. It was all about this project and I think the club is showing that ambition that everybody likes to have and they are really great, exciting times for Everton Football Club.

“Now it is up to the players, the management, the technical staff, everybody to show we are really strong and fight for it. It’s really important to get the fitness right and the team right.”

None of the newcomers have the experience of 31-year-old Rooney, who returns to Merseyside as a five-time Premier League champion who has played in three Champions League finals.

It is 22 years since Everton last lifted a trophy and Koeman hopes Rooney’s experience of winning multiple trophies can end that drought.

“We like to win – we like to win trophies and that is a feeling that not all the players have at Everton,” the Dutchman claimed.

“We have a lot of young players and we are trying to get the best team as possible and that experience to win titles is something really important for Everton.

“We made already some signings, different ages, and I think we missed a player like Wayne to bring back for the team and to have that experience.

As impressive as Everton’s summer recruitment drive looks on paper, they have just lost the man who scored 25 of their 62 Premier League goals last season.

New Manchester United striker Romelu Lukaku had expressed his desire to regularly win trophies and play in the Champions League and while Everton’s hierarchy may share that aim, the Belgian’s arrival at Rooney’s old club has now been confirmed.

“We knew it was one of the challenges with Lukaku,” added Koeman, who would not be drawn on either Ross Barkley’s future or the possibility of signing Olivier Giroud or Gylfi Sigurdsson.

“He took the right decision and let’s hope everything goes well for him because I like him, I like the player but it is now about Everton.”