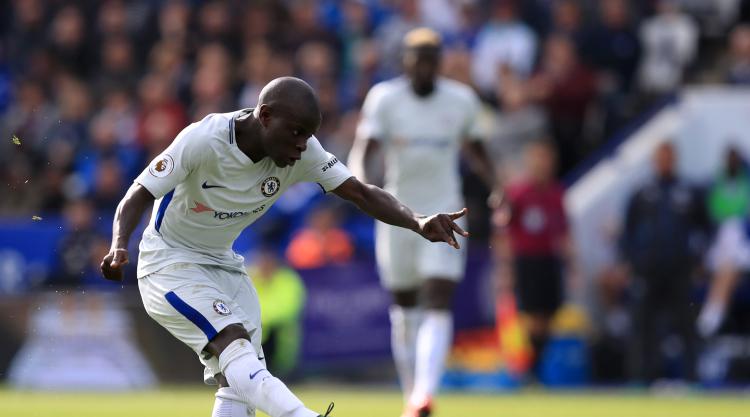 Much of the pre-match talk centred on Danny Drinkwater but it was another former Leicester player who returned to haunt them as Chelsea won 2-1 at the King Power Stadium.

N’Golo Kante, Drinkwater’s central-midfield foil during the Foxes ‘ 2015/16 Premier League title-winning season, was his usual energetic, tidy self and capped a typically consistent display with a goal from 25 yards to double Chelsea’s lead after Alvaro Morata’s opener.

Jamie Vardy pulled one back for the hosts from the penalty spot, but Antonio Conte’s team held on for the three points.

Kante made the move to Stamford Bridge last summer and Drinkwater followed him on transfer deadline day last month in a Â£35million switch.

Drinkwater began on the bench with his prospective Â£22million replacement, Adrien Silva, sitting in the stands with his future shrouded in uncertainty after FIFA dismissed Leicester’s registration of the player because the club missed the transfer-window deadline by 14 seconds.

The Portuguese playmaker’s prospective new club were slow to start and Kasper Schmeichel dealt with an early tester from Morata.

Leicester soon found their footing, though, and m idway through the first half Riyad Mahrez played Vardy through with a delicately weighted pass. Vardy took the shot first time but, with a Chelsea defender close by, he dragged his effort wide from the edge of the penalty area.

Wes Morgan frustrated Morata on two occasions just after the half-hour mark with solid blocks, but the Spain international would soon gain the upper hand in the duel.

Leicester spurned a golden chance to take the lead first, though. Islam Slimani won the ball from Kante on the edge of his own area and Mahrez spearheaded a swift counter-attack. Slimani had done well to keep up with his fellow Algerian and Mahrez slipped him in for a one-on-one with Thibaut Courtois but the Chelsea goalkeeper was out quickly to make a good save.

It proved a costly miss for the hosts as Chelsea went in front with their next attack. Cesar Azpilicueta crossed the ball from the right and Morata got above Morgan to head home after 41 minutes.

Five minutes into the second half, Kante struck. He was afforded too much room outside the penalty area and his low shot crept into the bottom corner of the net. Schmeichel appeared to react late and will be disappointed to be beaten from that far out.

That was the cue for Drinkwater to warm up on the touchline – to a mixture of appreciative applause and some booing.

In the 62nd minute Vardy beat Courtois to a loose ball and was brought down by the goalkeeper inside the six-yard box. He got back to his feet and tucked away the penalty to put Leicester right back in the match.

Chelsea should have had a spot-kick of their own when Harry Maguire clearly handled the ball from a Morata header, but the referee ignored the claims.

Drinkwater did not make it onto the pitch as Conte opted to bring on deadline-day signing Davide Zappacosta, the fit-again Eden Hazard and Willian, who went inches away from making it 3-1 with a lovely curling effort late on.