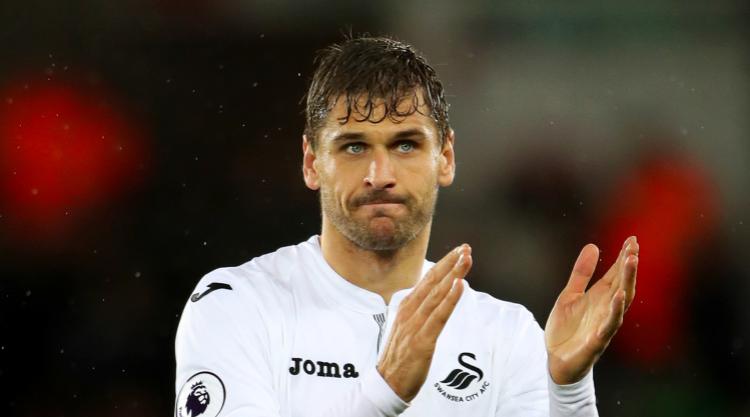 Fernando Llorente will sit out Swansea’s summer tour of the United States and is in danger of missing the start of the Premier League season.

Spain striker Llorente suffered a broken arm in a cycling accident on a family holiday in Italy last month.

Swansea head out to America on Thursday for a three-game tour, but Llorente will remain in Wales and continue his rehabilitation at the club’s Fairwood training base.

“This is a period where we have to be very careful that Fernando is not moving the arm,” Swansea head coach Paul Clement told the official club website.

“It’s difficult to know at this stage exactly when he will be fit to play.

“There is a chance that he could make the first game of the season, but I don’t think he will be in the kind of shape the rest of the squad will be in because they will have done six weeks (of training) and he potentially will only have done two.

“We have to see. It’s not impossible that he could be ready for the start of the season.”

Llorente still has his arm in a brace after his accident and is unable to move.

Swansea start their Premier League campaign at Southampton on August 12.

Clement said: “He had another X-ray on Monday which showed the bone is healing well.

“We need him to keep it in that position for a further week and then he will be X-rayed again.

“If it’s okay, he can begin to move it a little bit more at that point b ut there is no point him coming to America.

“There is work he can do, but it’s better for him to use the facilities we have got at Fairwood. He can do one-to-one work there while we are away.”

Swansea have said Gylfi Sigurdsson will be on the plane for the 10-day US tour, which takes in games against Philadelphia Union, Richmond Kickers and North Carolina.

The Welsh club have put a Â£50million valuation on Iceland playmaker Sigurdsson amid strong interest from Everton and Leicester.

And Clement said in a statement on Tuesday evening that if Sigurdsson does leave the club then it will only be done ” on the terms we want”.

Summer signings Roque Mesa and Tammy Abraham will be part of the Swansea squad in America.