The film and theatre veteran — best known for his work on Billy Elliot and The Crown — said residents in a quiet courtyard of Victorian social housing near King’s Cross were left feeling “powerless and humiliated” when the scheme was given consent last week.

Councillors at Labour-run Camden gave the go-ahead last Thursday to the plans from developers Balcap Re to demolish a 19th century mirror warehouse and replace it with a three-storey block in the middle of the courtyard. 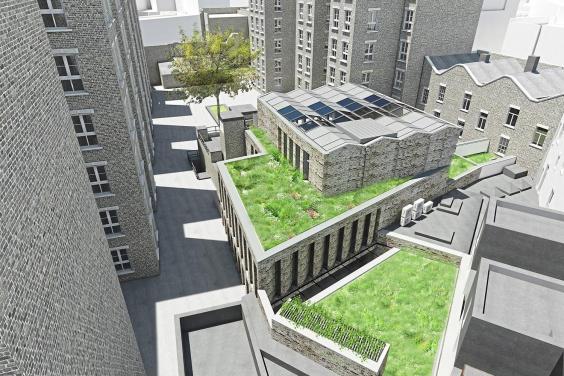 Camden: The scheme was given the green light last week

But Daldry, whose garden backs on to the site, said the concerns of more than 60 households who objected to the plans — largely on the grounds of loss of light and privacy — had been ignored.

In a letter to the Evening Standard, he wrote: “The system, it turns out, is a giant hall of mirrors, designed to confuse and mislead. Not a single resident received a reply.

“Not a single response to our questions and concerns were offered. No correspondence regarding any of the serious matters raised, all of which will permanently alter the physical and social make-up of this area, was received.”

Daldry, in charge of the opening and closing ceremonies of the 2012  Olympics, said the community, mostly council tenants, were given just five minutes  to put their case  at the planning committee meeting.

The courtyard, known as Derby Lodge, is Grade II-listed and was built in 1865 by a social housing trust founded by philanthropist Sir Sydney Waterlow.

Darren Brade, chairman of the Derby Lodge Tenants and Residents Association, said a legal challenge is being considered and added: “We really didn’t expect the meeting to be so cut and dried and totally ignore any grounds residents had for opposing.”

A spokesman for Balcap Re, set up by hedge fund bosses Taco Sieburgh Sjoerdsma and Clemente Cappello, said its project will “replace a tired, dilapidated, unused warehouse with modern flexible workspace… with the minimum of impact on existing local residents.

“We remain committed to working with residents throughout the construction and operation of the site”.

A council spokesman said the impact on light for neighbouring properties “was not considered to be significant enough to justify refusal.”

The developers will have to prepare a construction management plan for the site, in consultation with residents.