When the Post Office first launched its underground rail network in 1927, Londoners above ground were still travelling by horse and cart.

Now, more than 90 years later, the so-called Mail Rail has been resurrected and will open to the public for the first time ever this September.

In its heyday, the 6.5 mile network from Paddington to Whitechapel carried millions of letters daily between the capital’s sorting stations.

For 75 years it was the beating heart of the postal service, with electric, driverless trains whizzing through narrow tunnels 70-feet below the surface.

But in 2003 trains ran on the railway for the last time after Royal Mail bosses decided it had become too expensive.

The much-loved Mail Rail was abandoned, hidden and quickly forgotten. With its stations locked up and tunnels left to decay, the once-vital network was seemingly consigned to history for good.

But a painstaking, eight-year project has seen a section of the railway brought back to life as a tourist attraction – and the décor hasn’t changed a bit.

“Secret, abandoned, forgotten”… the Mail Rail adverts currently plastered all over the Tube certainly inspire intrigue. I was keen to see if the experience lived up to the hype.

The trip began in the old engineering depot at Mount Pleasant, an atmospheric place that still feels like the work only stopped yesterday.

The train itself consisted of a tiny red line of carriages, although unlike the originals I was pleased to see we had a driver. After squeezing inside and bottling up any lingering claustrophobia, we rolled off into the dark, narrow tunnels.

Zipping past old tracks and stopping at dusty platforms, it was easy to imagine how this hidden network kept the post coursing through London for 75 years.

I’d love to have travelled further along the track, but the short trip back in time we got was still first class.

The Standard was given a sneak preview, ahead of its official opening on September 4.

Tours start at the Mount Pleasant sorting office – the largest station on the line and home to the former engineering depot where trains were taken for repairs.

Visitors board a miniature train, adapted from the original to cater for people instead of parcels, which then departs on a revealing tour of the hidden postal world.

The ride, which lasts around 20 minutes, passes through stalactite-covered tunnels below Mount Pleasant and stops at some of the old station platforms. 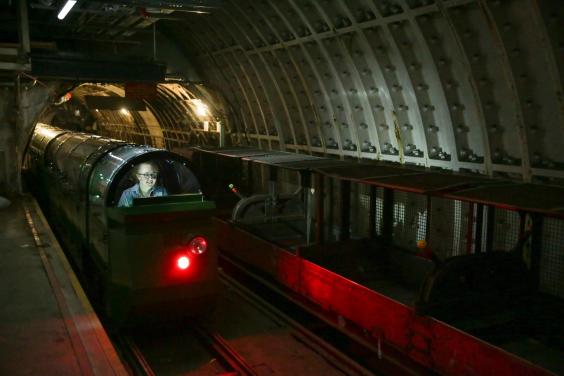 Audio-visual displays projected on the station walls bring stories from the railway to life, while a running commentary is played within the carriages.

The Blitz and an untimely powercut also feature on the ride.

As well as the train itself, there is an interactive exhibition located in the old engineering depot for visitors to explore.

Highlights include a real-life travelling post office complete with shaking floor and the chance to race pneumatic cars.

Mail Rail’s grand opening comes a month after the launch of the brand new Postal Museum.