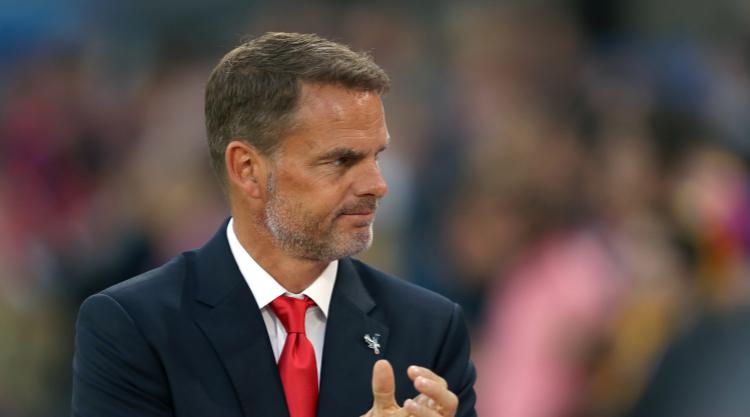 Frank de Boer was relieved to see Crystal Palace score their first goal under his management and hopes Carabao Cup victory over Ipswich can kick-start their season.

James McArthur’s late brace was enough to see-off a youthful Tractor Boys side at Selhurst Park, despite Bersant Celina pulling one back for the Championship club in stoppage time.

The 2-1 success – which follows back-to-back Premier league defeats to Huddersfield and Liverpool – was the first positive result for De Boer since taking over as Eagles boss from Sam Allardyce during the summer.

Speaking about the first strike of his tenure, the former Ajax and Inter Milan boss said: “You’re always waiting for that moment, and I’m really pleased for the team and for the fans – for everybody who loves Crystal Palace that finally we scored a goal.

“Winning gives you confidence, of course. It’s always nice to win, even of course though maybe Saturday (at home to Swansea) is more important to win after our two losses.

“If you analyse the first half, we couldn’t really get the pressure on them and that’s why we changed the system and from there on we had total control and created our chances.”

De Boer also praised the match-winning contribution of Scotland midfielder McArthur, one of seven players to come into the team after Saturday’s loss at Anfield.

“Quality shots with good composure, with accuracy, not hard (powerful) but especially with accuracy to put it in the corner.

“From that distance, I always said try to always shoot with your inside (sidefoot) because then you have the most possible chance to score goals and he did.

Ipswich manager Mick McCarthy saw his side’s 100 per cent start to the season come to an end as he fielded the youngest starting XI in the club’s history.

McCarthy made 11 changes from the team which saw off Brentford at the weekend – their fifth successive victory in all competitions – and played nine players aged 20 or younger.

He felt the youngsters acquitted themselves well.

“I am extremely proud,” he said. “They should be proud of themselves, it’s one of the things I’ve said to them. Some of those lads might get one game, they might get 150 games in the first team.

“They all wanted it, they all wanted to play in the first team. So don’t make it one of those occasions where you want to be careful what you wish for and you get it and you don’t live up to it.

“Well, I think all of them have more than lived up to it.”

Despite the impressive performance, McCarthy felt fitness played a part in the eventual defeat.

“They (Palace) only scored because we knackered, I think,” McCarthy added.

“We gave the ball away, we just got tired. It was a fabulous goal. That’s Premier League punishment, I’m afraid.

“Thank God we didn’t go to extra-time, I’d have had to send the nurse on, I think. They are all due in bed anyway.”